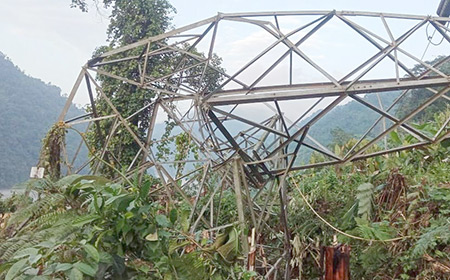 [ Prafulla Kaman ]
PASIGHAT, Jul 21: At least five eastern districts of the state have been reeling under acute power shortage, even as the power department is making efforts to restore electricity in the affected areas.
The affected districts are East Siang, Lower Dibang Valley, Dibang Valley, Namsai and Lohit, power department sources said.
Electricity supply to these districts remain snapped after a 132 kv power transmission line tower collapsed in Babuk village, in East Siang district, on 17 July due to landslides.
Meanwhile, the old 33 kv Aalo-Pasighat power transmission line is being renovated, and it is expected that the transmission line can be reenergized within a couple of days, a power department official said.
“We are repairing the old 33 kv Aalo-Pasighat transmission line through which 3 to 4 mw electricity can be transmitted, which is about 60 percent of the total power requirement of the Pasighat area,” said Assistant Engineer (E) Komkar Taso.
Currently, the department is drawing 2 mw of electricity from Assam to give some respite to the consumers in Pasighat town and adjoining areas. The total power requirement of the area is 7.5 mw.
Power department officials on Saturday held a meeting with East Siang Deputy Commissioner Kinny Singh to chalk out a strategy to mitigate the power supply problems in the affected districts as the restoration work will take not less than a month.