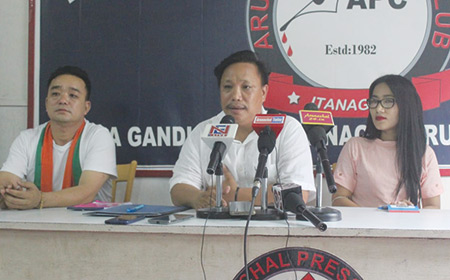 Staff Reporter
ITANAGAR, Aug 11: Welcoming the abrogation of Articles 370 and 35 (A) from the constitution, the state BJP on Sunday said the party has no intention of scrapping Article 371, which provides special provisions for Arunachal and 10 other states of the country.
Addressing reporters at the press club here, state BJP chief spokesman Dominic Tadar said abrogating Articles 370 and 35 (A) from Jammu & Kashmir was needed to “maintain the unity, integrity and sovereignty of the country.”
He thanked Prime Minister Narendra Modi and union Home Minister Amit Shah for “taking such a bold move for the welfare of the country.”
Tadar said it was because of the initiative of Syama Prasad Mukherjee and the effort of the present BJP government that the article has been removed, adding that the BJP’s agenda has always been to “integrate the country into one nation.”
He claimed that it was because of Article 370 that Jammu & Kashmir witnessed terrorism, corruption and separatist movements.
Tadar also spoke on Pakistan’s stand on the issue. “It is very unfortunate that the internal matter of a sovereign country like India is being debated and protested by Pakistan in their parliament,” he said.
When questioned about the implementation of the citizenship amendment bill (CAB) in the northeastern states, as it was one of the top agendas in the party’s manifesto, Tadar said the present state government and the entire Northeast are not in favour of the CAB.
“So, basically, the CAB will not be made uniform throughout the country. Wherever the people oppose the CAB, I think it will not be implemented,” Tadar said.
He added that Arunachal’s special status would not be disturbed, and that the state government would discuss with the Centre to ensure the continuation of the state’s special status.
Speaking on the BEFR, 1873, Tadar said the regulation is aimed at preserving the socio-cultural aspects of the state. “Thus, there is no contention that the BJP government is going to act on any issue that hampers the interests and sentiments of the state.”
Tadar advocated seeking an amendment, “so that the land, water and other rights of the people can be protected through it.”
When he was asked whether there was a possibility that Article 371 (H) might go the way of Article 35 (A), Tadar said, “If the central government feels that the special power conferred to the governor is not needed, then accordingly they will act.”