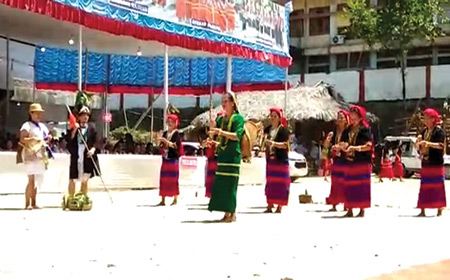 Staff Reporter
ITANAGAR, Sep 1: Solung, the socio-cultural and agricultural festival of the Adi community, was celebrated across the state on Sunday with great pomp and gaiety.
Attending the celebration at the Mopin-Solung ground here, union MoS (Independent) for Youth Affairs & Sports, Kiren Rijiju, lauded the progressive nature of the Adi community and how it incorporated other communities in the celebrations.
“The spirit of Solung is visible,” he said, and advised community-based organisations to work together for the welfare of all.
Rijiju also spoke on the slow pace of development in the state, and informed that the central government has provided funds that have remained unutilized.
“Not even 30 percent of the funds that I have brought for Arunachal from the central government in the past five years has been utilized. Under the Khelo India initiative last year, we gave 17 projects to Arunachal, and other states received one or two projects; but not even one of them has been completed here. This implies that we are not even utilizing the means available at our disposal,” he said, and urged the people to strengthen the hands of Chief Minister Pema Khandu in taking the state forward.
The MoS also expressed hope that Arunachal would send at least four to five players to the Olympics by 2032.
“With the help of the state government, we will create sports academies that will produce world-class players,” he said.
Also addressing the gathering, the president of the Society of Festivals of the Adis, Anong Perme, said the youths should be involved in such festivals and in multiple activities to preserve their identity and values.
The day also saw a series of performances depicting traditional stories from the past, besides dances with a modern twist to them.
Apart from others, the programme was attended by Dambuk MLA Gum Tayeng, Chief Secretary Naresh Kumar, and PWD Commissioner Bidol Tayeng.
Our East Siang correspondent adds: The Adi community of the Siang belt, including East Siang, Siang and Lower Dibang Valley districts, celebrated Solung with traditional fervour.
The celebration featured hoisting of the Solung flag, mithun sacrifice, and discussions on the Solung mythology, among other things.
The Donyi Polo Yelam Kebang centrally celebrated the festival in Pasighat, where its secretary-general, Tagom Tasung, dwelt on the Solung mythology.
Tasung said “festivals of the ethnic tribes belonging to the Abotani group are gifts of Kiine Naane (deity) for survival of the community through agricultural activities.”
PHED EE Rajen Taying, who attended the celebration in Ngorlung village in East Siang district, asked the community’s youths to learn about their tradition and culture “as it is a way of identity of an ethnic tribe.”
Stating that traditional customs are above religion, he urged the community’s people to preserve their living tradition through festivals.
Finance & Account Officer Kalak Tagi urged the youths to shoulder the responsibility of preserving their language, tradition and culture.
Pasighat West MLA Ninong Ering in a message to the villagers of Ruksin expressed faith that the festive celebrations would bring unity and prosperity to the community.
Solung was also celebrated in Mebo, Bilat, Depi-Detak and Rayang villages in East Siang district.
Solung is usually celebrated from the first day of September every year, but it is mostly celebrated in the first week of July in the Adi Pasi belt of Upper Siang district.
The festival is celebrated to seek blessings for a bumper harvest and the wellbeing of domesticated cattle, and for protection of agriculture crops from pest infestation.
Attending the festivity at the general ground in Upper Siang HQ Yingkiong, Agriculture Minister Tage Taki said the festival mythologies of the Tani tribes have similar origin stories and are closely related to agriculture.
He informed that the state government is emphasizing on agriculture, horticulture and allied sectors.
“The state government is determined to double the farmers’ income by 2022, for which we are stressing on short-duration crops, and livestock and fisheries development in the state,” he said.
The minister released an Adi audio album, produced by Geyam Sitek Libang, wife of Health Minister Alo Libang.
Among others, Libang, Yingkiong ADC Tamik Talom, Yingkiong GHSS Principal Amih Lego, and president of the festival committee addressed the people.
Earlier, on 31 August, Taki, who is on a three-day tour of Upper Siang district, witnessed the final of the U-16 football match of the festival. (With DIPRO input)