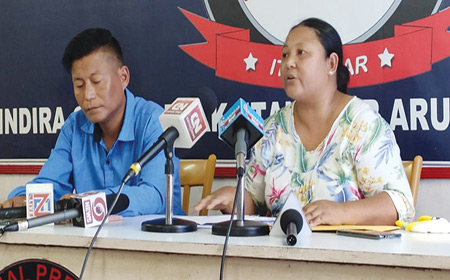 Staff Reporter
ITANAGAR, Sep 3: Seven students of the Sangay Lhaden Sports Academy (SLSA) in Chimpu have been rusticated, allegedly for stealing two packets of Maggi noodles from the hostel’s canteen, although the academy’s authorities have cited different reasons for the rustication.
Metung Loham, the mother of one of the rusticated students, said the school authorities claimed to have documentary evidence of the theft but failed to show the CCTV footage of the incident.
Addressing reporters at the press club here on Tuesday, Loham said the exact date of the alleged incident is also “unclear as of now, and the authorities concerned are yet to prove their allegations beyond doubt.”
She said the SLSA authorities also failed to respond to the Itanagar Child Welfare Committee’s direction to submit a detailed report in the matter.
Claiming that the SLSA authorities did not correspond with the families concerned before taking the extreme action against her son and six others, Loham claimed that she came to know of the development in April when she had visited the school to collect her son’s Class 7 (appeared) progress report.
On reaching the school, Loham said, she was asked to collect her son’s transfer certificate instead.
Pointing out that as per the laid down norms for schools, parents of students should be called for a meeting before taking such a step, Loham said the norms were not followed in the instant case.
“Only five members were present at the meeting that was held in June over the matter, in the absence of the chairman, the sports secretary, and other crucial members of the school management committee,” she said.
The SLSA has, however, made other charges against the rusticated students, such as smoking, coercion, and theft of a mobile phone.
Informing that the AAPSU, the governor, the chief minister, the education minister, the sports minister, the chief secretary and the capital complex DC all failed her despite her having brought the matter to their notice, Loham said all she wanted was “a valid reason” for her son’s rustication.
“And if there is none, then my son, who was selected from Changlang district after clearing the merit test, should be readmitted to the academy,” she said.
Loham said her son had first been wrongly implicated in the noodle theft incident, “and now, when the matter has come out in public, the school’s authorities are levelling other false allegations against my son.”
Expressing concern over her son’s mental health following the rustication, Loham said that, according to doctors at the TRIHMS, her son “is now in depression and has suicidal tendencies.”
Also raising suspicion that there might have been “corrupt intention” behind rusticating the students, Loham claimed that a student, who is allegedly a relative of the academy’s principal, was recently given admission in the 8th standard, “which is a blatant violation of the academy’s admission norms, as they take admission from Class 6 only.”
The capital complex DDSE office had constituted a committee in August to inquire into the matter, and the team, led by the DDSE, in its comprehensive report refuted the allegations of the parents and upheld the school’s decision, stating that the action taken was to safeguard the integrity of the institution.
Based on the committee’s findings, the report said there was no ill-intention behind rusticating Loham’s son and the others, and that “it is purely a disciplinary action from the directorate of sports due to unruly activities by the students.”
According to the school’s authorities, Loham’s son had been “caught red-handed stealing the mobile handset of a senior student of the school.”
The SLSA authorities told the inquiry committee that Loham’s son had been warned on several occasions by the school authorities but there had been no improvement in his behaviour.
With regard to the parents’ claim that they were not informed about the decision to rusticate the students, the SLSA authorities said the parents had in fact been informed about the matter in February, when their son had been caught red-handed stealing the mobile handset of a senior student. They said Loham had herself bought a new mobile handset for the boy from whom her son had allegedly stolen.
The school’s authorities also claimed that the boy has already taken admission in his parents’ district.
This daily was unable to get a statement from the SLSA authorities on the current allegations.