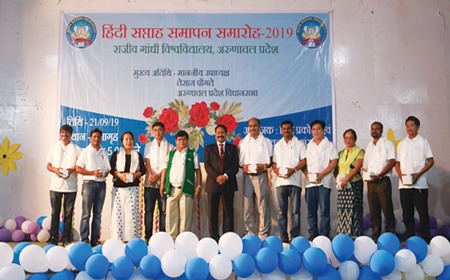 Hindi is not a threat to tribal dialects, says Pongte

RONO HILLS, Sep 22: “Hindi language is not a threat to the tribal dialects; instead, it helps different tribes communicate with one another in the state,” said Deputy Speaker Tesam Pongte on Saturday.
Addressing the valedictory function of the ‘Hindi Saptah’ celebration at Rajiv Gandhi University (RGU) here, Pongte said promotion of Hindi in the state would help unite people “as we are true Indians, even as we should encourage promoting the different dialects.”
He spoke about the advantages of knowing the Hindi language in India, particularly in multi-linguistic regions, “as it can be used as the link language,” and commended the university for promoting Hindi through the event.
RGU Vice Chancellor Prof Saket Kushwaha opined that knowing various languages “enhances one’s personality and leads to more success.”
“Language is also important for national identity, so it’s better to promote the Hindi language while preserving the mother tongues,” he said.
Member of the Central Advisory Board on Child and Adolescent Labour, Tai Tagak said the different tribes in Arunachal should develop their own scripts for their dialects.
Stating that one tribe of the state has successfully developed a script in order to preserve its language, he said other tribes also should strive to do the same.
Various Hindi literary events and competitions in painting, extempore speech, debate, essay writing, poetry, etc, were organised during the week. Emchi House won the ‘best house’ prize.