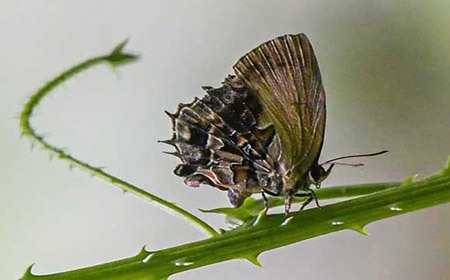 PASIGHAT, Oct 12: In all, 133 varieties of butterflies were spotted including the Rare Saffron (Motam-assyla), Yellow Veined Lancer (Pyroneura-margherita), Scarce Red Forester (Letha distans Butler), Indian Awlking, White Dragontail and Jungle Glory, by enthusiasts at the third edition of the recently-concluded ‘Pasighat Butterfly and Diversity Meet.’
In order to promote inclusivity, this year’s edition of the festival was held at Ledum in East Siang district from October 8 to 10 last. It’s conclusion coincided with the start of the first Easterly Essence Ledum Festival.
Also, plans have been made to compile photographs of the butterflies spotted during the meet to be released as a coffee table book.
Apart from butterfly observation, a fish survey was also conducted by Ph. D scholars of the Rajiv Gandhi University as a part of the biodiversity conservation efforts.
Officially the ‘cleanest village’ in East Siang district, the villagers had also banned hunting in jurisdiction of Ledum to protect the wildlife.
The event was organised by Destination Ledum in collaboration with the State Foundation for Biodiversity Conservation, Society for Education & Environment Development, East Siang Homestay Operators, Ane Siang Tours & Expeditions and the Ledum village Council, department of environment & forest and department of tourism.