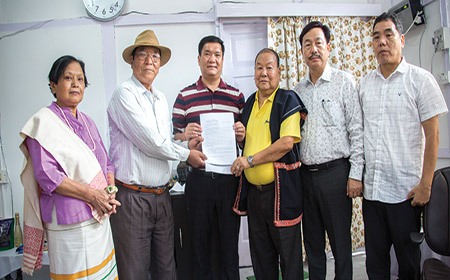 YINGKIONG, Oct 12: Exhibiting ‘pro-development’ attitude, 10 villages falling under the proposed 150km Yinkgiong to Bishing 2-lane highway declared not to claim any land compensation for the road construction.
The delegates from 10 villages of Gette, Pugging, Likor, Palling, Singging, Angging, Zido, Ngaming, Mayung and Bishing led by Bani Danggen and Takkin Tekseng met Chief Minister Pema Khandu here on Saturday and informed about the decision.
Coming under the banner of ‘Yingkiong to Bishing 2-lane Highway Road Committee’, the delegates informed the CM that a public meeting was held recently regarding the proposed road construction for its early start and submitted a resolution copy of the meeting.
In the resolution adopted, people from the said 10 villages expressing deep regret over non-connectivity, unanimously resolved to fully cooperate with the government for fast completion of the proposed road construction without claiming a single penny under the land compensation.
Appreciating the proactive attitude of the villagers, Khandu said such cooperative gesture shown by the villagers is an example for the rest of the state to follow. He said such positive attitude is need of the hour particularly when many development projects of public importance in the state are stuck due to land compensation matter.
The CM assured that the proposed road construction matter will be taken up with the union ministry on priority for its early sanction. He also informed the delegates that the survey work for the proposed road has been completed. (CMO)