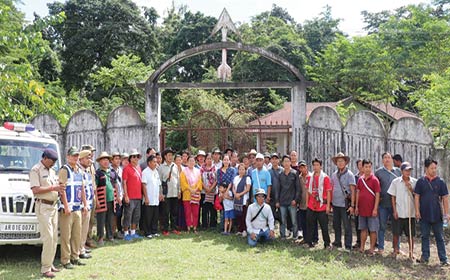 [ Karyir Riba ]
YABGO, Oct 13: The Tourism Department in Lower Dibang Valley district, in collaboration with the Himalayan Orange Tourism Committee, local tour operator A1 Travel Management (A1 TM) and villagers of Yabgo, Tapat, Dambuk and Bizari conducted a mass social service at Bongal Yabgo, a war memorial site here in Dambuk on Saturday.
This initiative was taken by the Tourism department to mark Paryatan Parv. The programme mainly aims to beautify and revive the Bongal Yabgo, and to later set up a community museum alongside a community cafeteria, with the motto ‘revive our assets.’
The Bongal Yabgo, a 283.22 crore project, was built in the year 2006 under the project name of ‘restoration and preservation of historical heritage of stone rampart at Yabgo’, to commemorate the brave warriors of the Adi tribe that had fought the British Army and stopped them from entering the area.
Toni Borang, a villager from Yabgo, describes the time between 1893-1892 as “the toughest war fought between the Adi tribe and the British Army.”
They would hide behind the boulder barriers and attack the British Army with poisonous arrows, he informed.
Parts of the boulder barriers still exist and is contained inside the boundary walls of the war memorial. Statues of Adi warriors fighting on elephant backs can also be seen adorning the place. However, all these statues are in unkempt conditions, hidden under the overgrown jungle and the site lacks total care. The two building structures of the site are also in abandoned and broken condition, filled with cow dung.
A1 TM Director Neharika Sahgel Umbrey informed that now, along with the Tourism Department, her company has taken the initiative to revive this war memorial site, and to pay the much-needed care it deserves.
DC Mitali Namchoom assured that the district administration will provide full cooperation in reviving and in beautification of this historical war memorial site before this December. She also beseeched the villagers to take care of this site and keep alive chivalry of their ancestors.
The tourism department appreciated the assistance provided by SP Roing Sanjay Kumar Sain in the social service, which was also voluntarily joined in by the Adi Bane Kebang LDV unit and the Dibang Right Bank Idu Mishmi Charitable Society.
To mark the eve of the ongoing Prayatan Parv, the A1 TM also organised a short trekking trail at Kapang village, in view of the upcoming Orange Festival of Dambuk on Sunday, under the Department of Tourism. Everesters Tine Mena and Muri Linggi, TIO Anung Lego, villagers of the area and other tourism enthusiasts took part in the trekking.