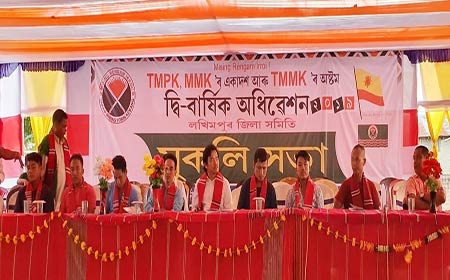 KIMIN, Oct 13: ADC Likha Tejji called upon the youths of the Mising community to “create a platform for interaction with homogeneous Nyishi, Adi, Apatani, Galo and Tagin communities.”
Tejji highlighted that the Kimin ADC headquarters is spread from Boginadi to Dolohat in Assam and Bogunadi to Buka village in Arunachal, and “though the Misings in Assam and Nyishis of Arunachal share the same inter-state boundaries, there has been no effort to assimilate and interact with each other.”
Addressing a gathering during the district students’ union election of the Takam Mising Porin Kebang (TMPK) recently, the ADC said that “there has been no effort to strengthen the prevailing political and administrative gap due to alienation in the name of separate states.”
“Once proper cultural interaction takes place among the homogeneous cultures, peace and amiability shall prevail in the interstate border,” he said.
Accordingly, a resolution was taken to conduct an interaction program between Nyishis and Misings living in the inter-state border under Kimin Administrative jurisdiction from Boginadi to Dolohat soon.
Several representatives of the Kimin-Kakoi Twin Circle Youth Organization, All Kimin Youth Welfare Association, and All Kimin Students’ Union also attended the programme.