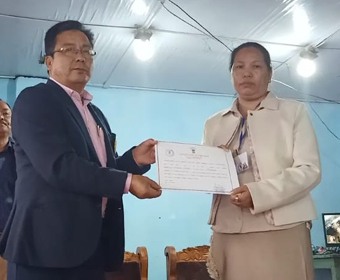 ITANAGAR, Oct 24: Chakat Aboh has won the Khonsa West bye-poll by a margin of 1887 votes against Azet Homtok.
Of the total 9591 voters, 5705 voted for Aboh.
The bye election was held following the murder of Tirong Aboh, who won the seat in the April election as a National People’s Party (NPP) candidate.
Chakat was the consensus candidate of five political parties, including the Bharatiya Janata Party, Congress and NPP.
Speaking to this daily from Khonsa, Chakat dedicated her win to the people of Khonsa West and the rest of the state, besides Chief Minister Pema Khandu and the political parties that sent her as their consensus candidate.
“The kindness of the people of the state has been overwhelming. I have lost everything and experienced the most bitter part of human life so I pray for everyone’s peace,” Chakat said.
“We have to maintain peace and harmony for the development of the state,” she added.
Chakat lost her husband Tirong Aboh, son and five other family members on 21 May where 11 people lost their lives in a massacre, allegedly carried out by the NSCN (IM).
Meanwhile, Chief Minister Pema Khandu took to social media to congratulate Chakat.
Chief of Dadam Wanggo Lowang, Dadam Area Youth Association, Women’s Association of Dadam Area and All Christian Federation have thanked Khandu and all political parties of Arunachal Pradesh for supporting Chakat candidature from day one.