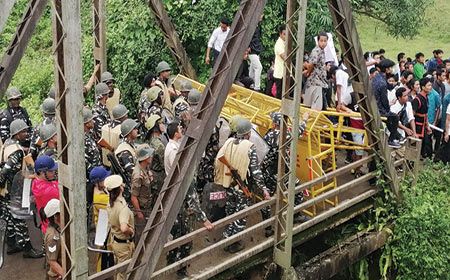 Staff Reporter
NAMSAI Oct 25: There is reported communal tension in Namsai after 14 houses were burnt down in Mabira, a new village near Khai-Hay Nallah under Tengapani reserve forest area.
The district administration has clamped prohibitory orders under 144 CrPC and Arunachal Pradesh Unlawful Activities (Prevention Act) 2014 in Namsai town ahead of a protest rally claiming that rally would create communal tension around Namsai area.
It is learnt that tension started after some miscreants had torched the village wherein 14 houses including a community hall were burnt down between October 12 and 15.
Today, the situation was tensed as the Adi Students Union (AdiSU) peace rally turned violent as they clashed with the paramilitary forces at Jengthu Bridge and started pelting stones at the paramilitary force, police and the magistrates.
Several police personnel including Superintendent of Police Ankit Kumar Singh and DySP Sepraj Perme and Dy SP Tezu Thutan Jamba sustained injuries during the protest rally carried out by the AdiSU demanding immediate arrest of the culprits involved in New Mabira village arson.
DySP Perme reportedly sustained head injury and DySP Tezu Jamba got leg injuries during the protest.
SP Singh confirmed that tension still prevailed in the town.
AdiSU in its representation to the deputy commissioner Namsai accused few individuals of All Tai Khampti Singpho Students Union (ATKSSU) responsible for the arson and demanded their immediate arrest.
However, it is learnt that ATKSSU has denied their involvement behind the incident.
The AdiSU also demanded for immediate relief and rehabilitation and security to the affected families of New Mabira village.
Meanwhile, the district divisional forest office Namsai has said that it did not issue NOC or forest clearance for the establishment of New Mabira village at Khai-Hay Nallah under Tengapani Forest Reserve.