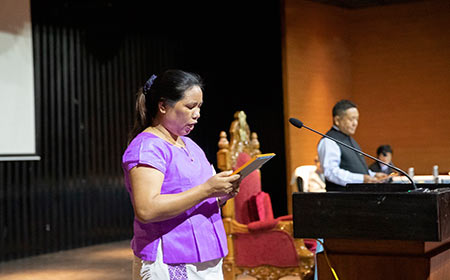 ITANAGAR, Oct 28: Newly-elected MLA from the Khonsa West assembly constituency, Chakat Aboh, took oath as a member of the state legislative assembly on Monday.
Speaker PD Sona administered the oath of office and secrecy to Aboh at the Dorjee Khandu auditorium of the assembly secretariat here, in the presence of several MLAs and hundreds of Aboh’s supporters.
Aboh won the 21 October bye-election to the constituency, defeating her lone rival, Azet Homtok, by a margin of 1,887 votes.
Aboh, the widow slain NPP leader Tirong Aboh, who was assassinated in May this year, had been unanimously fielded by five major political parties, including the ruling BJP, in the state.
Tirong Aboh, his son, and nine others were massacred by suspected NSCN (IM) militants at 12 Mile area in Tirap district on 21 May, two days before he was declared elected from the Khonsa West seat. (PTI)