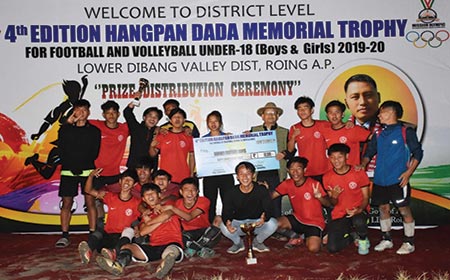 [ Karyir Riba ]
ROING, Nov 30: The 4th district-level football and volleyball tournaments for the Hangpan Dada Memorial Trophy (HDMT) were conducted at Kera aa Jubilee Ground here in Lower Dibang Valley district on Saturday.
The tournament was conducted for both boys and girls below 18 years of age.
While Jia and Rayang won the volleyball and football tournament, respectively, in the girls’ category, Agamgite and Doons Hostel, Cheta, were the winners of the volleyball and the football tournament, respectively, in the boys’ category.
Rayang and Jia were the runners-up in the girls’ volleyball and football, respectively.
In the boys’ category, Jia and Parbuk were the runners-up of the volleyball and the football tournament, respectively.
While Lame Linggi was adjudged the best football player in the girls’ category, the title of the best football player in the boys’ category went to Tobom Langkam.
Taiyang Langkam and Nongkhil Thekil were adjudged the best female and male volleyball players of the tournament.
The winning teams were awarded Rs 50,000 each with trophies, while the runners-up teams were given Rs 25,000 each with trophies.
The best players in football and volleyball were awarded Rs 7,000 and Rs 5,000 each.
The winners will represent the district at the state level tournament, which is likely to be conducted from the second week of January next year.
Eight teams from the two constituencies of the district participated in the tournament, which was organized by the sports & youth affairs department, in collaboration with the district administration.
Meanwhile, DSO Raju Mipi said there has been “tremendous” improvement in the sports among the players of both the sexes in the district.