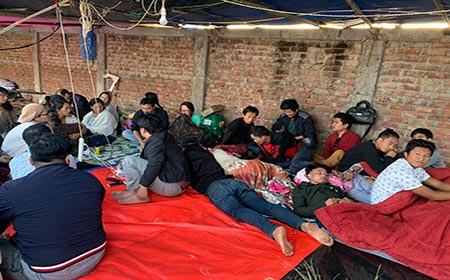 Staff Reporter
ITANAGAR, Dec 01: There seems to be no solution in sight as one of the hunger strikers against inclusion of non-APST in the Panchayat electoral roll of Vijoynagar area in Changlang district has landed up in the hospital.
The protestor who has been admitted in a hospital in Itanagar has been identified as Nwgladi Yobin(29).
Its been five days since the All Arunachal Pradesh Anti-Corruption Students Union and All Yobin Students Union had launched indefinite hunger strike at the IG Park Tennis Court against the state government demanding deletion of non APST names from the PRI electoral roll.
Reportedly, the state government’s attempt to dissuade the protesters to call off hunger strike failed, as the agitators are adamant on their demand.
The state government has sent district administration to convince the students who are on hunger strike considering their health condition, however, the students turned down the government proposal demanding the assurance be issued in writing.
Meanwhile, five agitators who were hospitalized have rejoined the hunger strike.