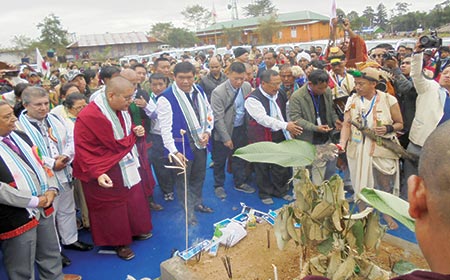 PASIGHAT, Dec 1: Chief Minister Pema Khandu on Sunday stressed on preservation of local languages reasoning that erosion of culture begins from depletion of mother tongue. He further stressed that culture and faith cannot be separated and are inextricably connected. The CM was addressing the gathering at the Indigenous Faith Day celebration here at the Central Donyi Polo Yelam Kebang in East Siang district.
The CM also called on the youths of the state to shoulder the work of preserving the age-old traditions and beliefs.
‘It is the duty of every Arunachalee to preserve their indigenous culture, as it is their identity,’ the CM said and added that visitors come to Arunachal to have glance of the authentic indigenous culture, which is a major attraction of the state.
On opening of department of indigenous affairs, Chief Minister said ‘it received great appreciation from states such as Mizoram and Nagaland.’ He told the gathering that people from these two states views that the department will prove to be of great help towards preservation of indigenous culture and identity.

Donyi Polo Kumko in Pasighat
Speaking on the occasion, Chief Minister appreciated the initiative by DPCCT and IFCSAP for the construction of ‘Donyi Polo Khumko’, which he observed ‘will go a long way in preservation of indigenous faith and belief among the Abotani tribes of Arunachal.’ He also expressed happiness that the prayer centre will serve as a centre of learning and assured all government support.
On the occasion, the 7th Kyabje Yongzin Ling Rinpoche appealed the youths to preserve and promote the rich cultural heritage of the state.
‘Our Indian culture is diversified where people with different faiths and beliefs are living together and our day-to-day life is deeply-rooted with rich tradition, belief, faith, culture, good habits since time immemorial,’ he said adding that Indic-Buddhist civilizations can give guidance for a new world order based on conflict avoidance, environmental consciousness and sustainable development.
Ven. Dr. Dhammapiya suggested to celebrate the Indigenous Faith Day jointly by all indigenous people in a particular day in NE region as an annual event.
‘Health and education will bring more development and good human resource, but at the same time, we should not forget to maintain our tradition and culture,’ he said.
Ling Rinpoche also consecrated the foundation stone for construction of ‘Donyi Polo Khumko’, a prayer centre for believers of the indigenous faith ‘Donyi Poloism’.
Chief Minister along with Ling Rinpoche, and Dr Dhammapiya paid homage to Golgi Bote Talom Rukbo offering prayers in front of the 20 feet statue of Talom Rukbo.
Earlier, the celebration organised by Donyi Polo Cultural and Charitable Trust (DPCCT) and Indigenous Faith and Cultural Society of Arunachal Pradesh (IFCSAP) began with the formal ritual of ‘taku tabat’ performed by Ling Rinpoche.
Present on the occasion were Director of Vivekananda International Foundation Arvind Gupta, General Nirmal Chander Vij, Lt Gen RK Sawhney, Vice President of Vivekananda Kendra A Balakrishnan, Former Governor PB Acharya, Rajya Sabha MP Vinay Sahasrabuddhe including delegates from Poland, Armenia, Syria, Thailand etc.
At Seppa in East Kameng district, the people from different walk of life celebrated the Indigenous Faith Day here at Nyedar Namlo with pomp and gaiety.
Attending the celebration, Minister of PHE&WSD and DoTCL Wangki Lowang exhorted the people to maintain and preserve their rich and age old indigenous faith and religious practices for keeping ethnic identity intact. He further urged everyone not to give up their ancestral tradition and religious practices. Minister Lowang opined for mass awareness amongst tribal communities and urged all stakeholders to shoulder the responsibility and work in tandem with missionary zeal to promote and sensitize people about their rich culture and tradition.
Speaking on the occasion, Dr. A K Tripathy, Principal of Rajiv Gandhi Govt. Polytechnic College, Itanagar, also opined that with sheer dedication and sacrifice it is possible to promote and propagate any religious belief and faith to achieve its zenith. He also advised all for widespread promotion of their rich tradition and culture.
Cultural displays by East Kameng Artist Society (EKAS) and Namlo group were the highlight of the day.
In order to generate awareness amongst masses, a procession enlightening and displaying importance of culture and tradition was also organized by the people in local attire earlier in the day.
At Tezu, the Indigenous Faith Day 2019 was celebrated with full gusto and enthusiasm at Jubilee Ground.
Speaking on the occasion, Tezu MLA Karikho Kri exhorted one and all to preserve ones culture and identity. He stated that Lohit district has been home to various tribes of Arunachal Pradesh since time immemorial and all the tribes have been residing in the district in harmony and peace.
Among others, government officers including SP Dr D.W. Thongon attended the programme.
The IFD was also celebrated by the Tirap Indigenous People Society (TIPS) in congruence with other tribes of Arunachal Pradesh at Nehru Stadium on Sunday.
Speaking on the occasion, Tirap Deputy Commissioner PN Thungon urged the gathering to preserve indigenous faith and culture and follow the traditional way of life. He also appealed to the people to not mix culture with religion.
Agriculture Deputy Director Pangnye Khoisia, public leader Sephua Wangsu and TIPS president Senok Sumnyan also spoke.
Indigenous sports, traditional folk songs and dances were organized to mark the day.
The IFD was also celebrated at VKV Balijan in a befitting manner. (CMOs and DIPROs)