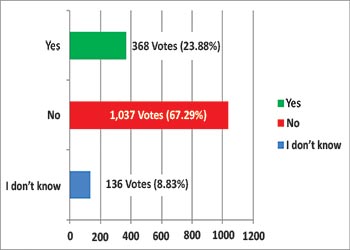 1. The CAB will apply in the Northeast and, unfortunately, no one can stop it. The public does not know the meaning of CAB. The government is fooling us. Its side-effects will appear after a few years. This will create havoc in the Northeast.
2. The CAB is detrimental to the very existence of the minority tribes of Northeast India and would change the entire region’s demography.
3. Can’t Afford Bangladeshis (CAB) in our area. It’s a big No to CAB.
4. It violates Article 14 of the Indian constitution. Moreover, it will enable refugees like Chakma-Hajong to take shelter in protected land like Arunachal, Nagaland and Mizoram.
5. I don’t even want to accept it. It will succeed against the will of the people. How long will the people fight, after all? A very devastating and sad moment for us.
6. CAB or not, granting of citizenship has been there. This is just a special provision for a category of people. The hullabaloo over the CAB is uncalled-for.
7. I as an indigenous person of the Northeast don’t support this bill as it will have an adverse impact on us, and on our region. I think the CAB will succeed in the Northeast even if we oppose it, because the parliament has already passed it. My question to the people of the Northeast region, particularly Assam is – why are they crying now? Why is there an outcry now? Our people could have shown their power in the 2019 general election, and we could have taught a lesson to the BJP in the 2019 election, because we knew that the BJP would bring back the CAB if they were voted to power again, which was also reflected in their election manifesto. Amit Shah also announced in a meeting in Assam that they would bring back the CAB. Our opposition and protest will go in vain. Now our hope is only in our judiciary. God bless our Northeast region and its people.
8. The living style and thinking of the people of the Northeast are quite different from those of other states of India. So the CAB won’t succeed here. There will be bloodshed and other kinds of violence in the Northeast.
9. The CAB has disregarded the sentiments of the people of the NE region. Arunachal/NE region can’t absolve itself of the CAB’s impact in the long run. Even the ILP and other provisions wouldn’t save us. The demography of the Northeast will be badly threatened. As an Arunachalee, I feel that the Chakma-Hajong issue should be resolved first. I consider the CAB a curse from @#modi.02 government on the entire NE region.
10. The so-called Modi 2.0 government must understand the sentiments of the people of the Northeast when there is clear and the loudest resentment against the CAB.
11. People supported the government by casting their votes in favour of the BJP, which had openly declared that the party would introduce the CAB.
12. It will never be implemented here. We won’t let it be implemented here.

The government of Arunachal should find a permanent solution to the Chakma-Hajong issue.

The BRO should explain for what strategic reasons it covered the names of Kimin and Arunachal during the defence minister’s recent visit to the...

District administration, IMC and police should work towards improving chaotic traffic in the ICR.