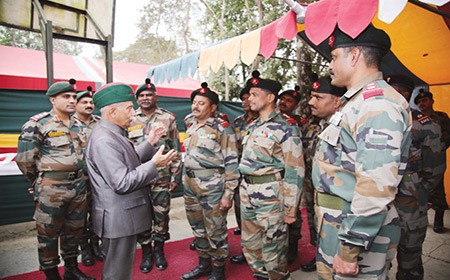 CHOWKHAM, Jan 4: Governor BD Mishra advised the troops deployed along the India-China border to maintain bonhomie with the locals while guarding the border.
Addressing the officers and soldiers of the 20 Madras Regiment during a ‘sainik sammelan’ here in Namsai district on Friday, Mishra said, “Bravery, discipline, camaraderie and cohesion among the troops of the Madras Regiment have always been exemplary and emulative.”
He said that physical fitness, training and operational management of the regiment have been some of the best attributes among all the regiments of Indian Army, and exhorted the troops to maintain the combat spirit.
Stating that every troop must imbibe the ‘nation-first’ spirit, Mishra said “the gallantry of the Indian soldiers and the strong apex political leadership have proved the mettle of the Indian armed forces in international security scenario.”
2 Mountain Division GOC, Maj Gen Sanjeev Chauhan, 82 Mountain Brigade Commander, Brig Sajeev Kataria, and 20 Madras Regiment Commanding Officer, Col PA Parthasaradi Pathrudu were present during the governor’s visit to the 20 Madras Battalion headquarters here. (Raj Bhavan)