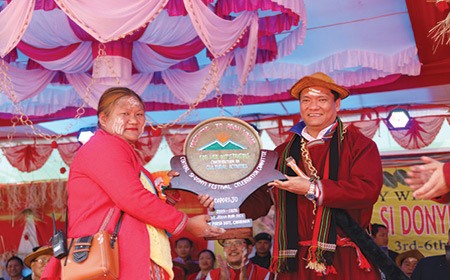 DAPORIJO, Jan 6: “Cultural erosion begins once we start to lose our language,” Chief Minister Pema Khandu said in his address at the Si-Donyi festival celebration here in Upper Subansiri district on Monday.
Khandu, who along with Basar MLA Gokar Basar, Tourism Minister Nakap Nalo and Daporijo MLA Tanya Soki took part in the celebration, said the state government is making every effort to preserve the local dialects. He said the creation of the department of indigenous affairs (DIA) “will help in this endeavour.” 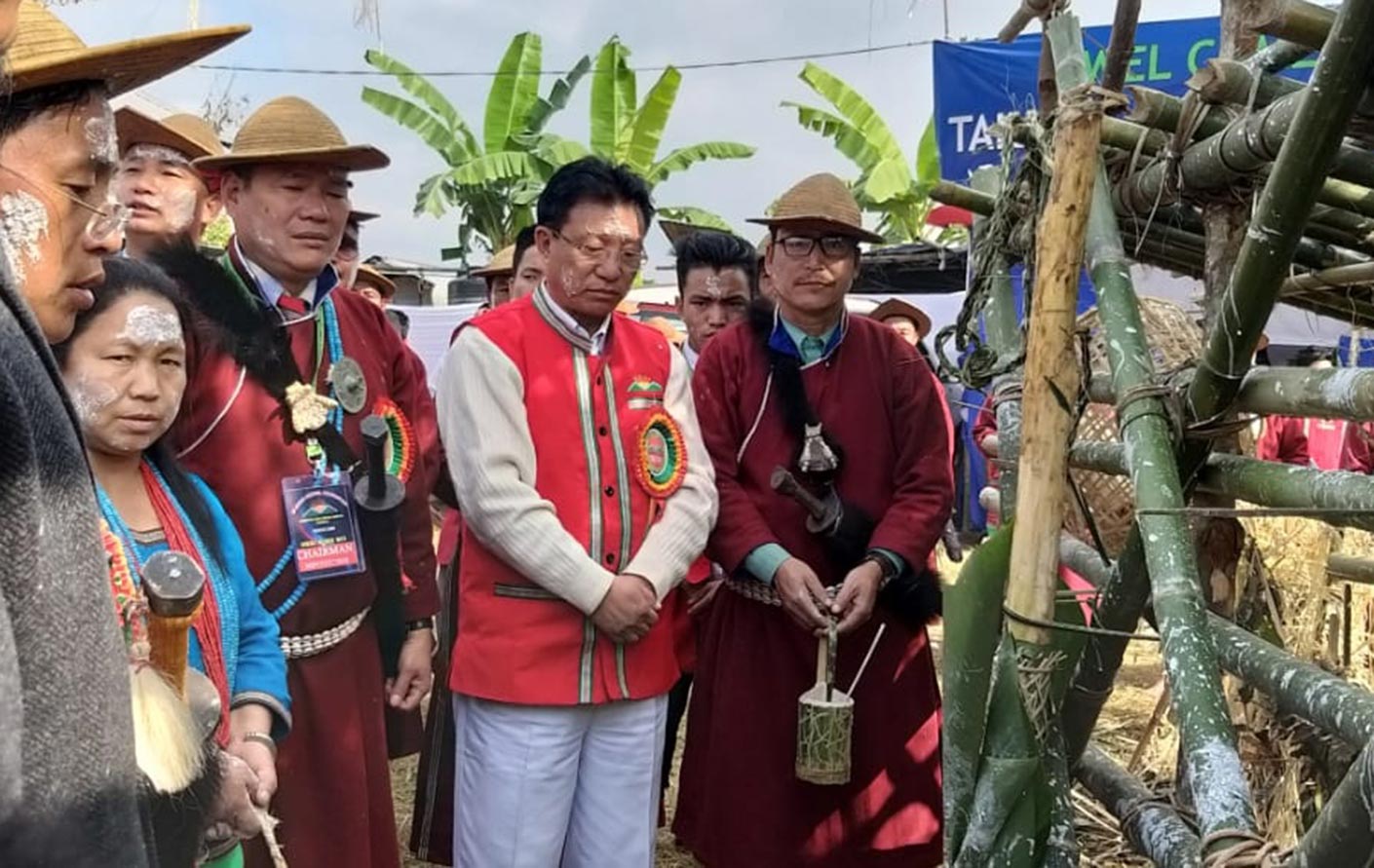 The chief minister urged the Tagin community to preserve its rich culture and heritage, and requested the elders of the society to pass on their valuable knowledge to the coming generations.
“Nyibus (priests) have a special place in our culture as they are the vital link between our human world and the other world,” Khandu said.
Emphasizing the necessity to protect the tribal dialects, he urged parents to speak to their children in their mother tongue.
Speaking on the development of Daporijo township, Khandu said the government will this year sanction a water treatment plant (WTP) of 4 mld capacity in order to address the shortage of drinking water in the township.
This is in addition to the 2.6 mld WTP which the CM had earlier inaugurated.
On education, Khandu said his government is “taking positive steps and is focused on improving the infrastructures and facilities of the government higher secondary school of Daporijo and other government schools in the district.”
He thanked the Tagin Cultural Society for accepting his request to adopt government schools in its area, and commended the Tagin society for its decision to “shun the practice of receiving donations in any kind for festivals from the dignitaries attending as guests.”
On market linkages for farmers, Khandu said the government will soon start providing “price and demand forecasts for various major horticulture crops to help farmers take informed decisions on growing different crops.”
He said he would return here to review all the developmental projects being taken up.
In Naharlagun, Education Minister Taba Tedir appealed to the community leaders of various tribes of the state to “join hands for protection, preservation and promotion of indigenous culture and tribal identity.”
Addressing the Si-Donyi festival celebration in the town’s A Sector, Tedir said “there is an urgent need to educate and guide children to speak their own dialects at home.”
He said the state government has created the DIA to look after the promotion of the cultural identity of the tribal communities of the state.
“The DIA is also looking to promote tribal languages in various parts of the state as a third language in educational institutes,” Tedir informed.
Terming local priests “one of the most important aspects in developing indigenous activities,” he appealed to various organisations of priests to work under the banner of the Indigenous Faith and Cultural Society of Arunachal Pradesh (IFCSAP) to strengthen their organisations, and assured them of all support from the DIA.
Tali MLA Jikke Tako urged the people to celebrate festivals “with the motive of strengthening traditional and cultural values and beliefs without losing any originality.”
Capital complex Si-Donyi festival celebration committee chairman Make Bui and its secretary Tabu Luchi spoke on the significance of the festival.
Former home minister Daklo Nidak, Capital Complex DC Komkar Dulom, members of the Tagin Welfare Society and the IFCSAP, local leaders, and government officers and members of the Tagin community residing in various parts of the capital complex took part in the celebration.
Prizes for various games and sports competitions held earlier were given away by the dignitaries. (With input from CM’s PR Cell)