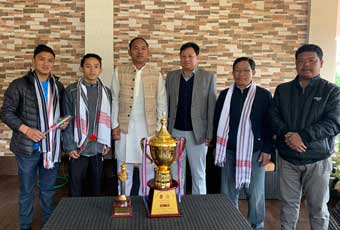 ITANAGAR, Jan 9: Sports Minister Mama Natung on Thursday felicitated young boxer Heli Tana Tara, who won the gold medal in the 49 kg weight category and the title of the best boxer in the All India Inter-University Boxing Championship held in Bhagat, Uttar Pradesh, from 26 December, 2019 to 2 January 2020.
Tara also won a gold medal in the Northeast Zone Elite Boxing Championship held in Chirang, Assam, from 3 to 6 January. A resident of Papu Hote village in Pijeriang circle of Pakke-Kessang district, Tara is currently studying at Dera Natung Government College, Itanagar.
Congratulating the pugilist, Natung, who was accompanied by Pakke-Kessang MLA Biyuram Wahge, said Tara has made not only East Kameng and Pakke-Kessang but the entire state proud.
Natung also congratulated Tara’s coach, Karling Natung, for his dedication to coaching.
“I have been encouraging and supporting sports, especially martial arts and boxing, in the district. The only thing you need to do is channel your energy and passion in the right direction,” the minister said.
Encouraging Tara to be sincere and dedicated, Natung said, “Since you have chosen boxing as a profession, it should be in your blood, in your vein. Only then will you be successful.”
The minister informed that his department has been giving incentives to meritorious sportspersons in various disciplines “under the leadership of current Chief Minister Pema Khandu.”