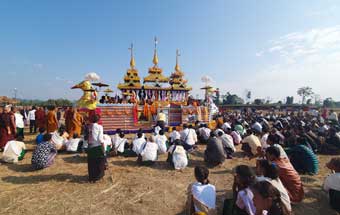 NAMSAI, Jan 16: Deputy Chief Minister Chowna Mein participated in the inaugural day of the three-day Poi-Leng festival which commenced at Weingko village near here on Thursday.
The festival is celebrated in honour of late Ven Indrabangsa Mahathera, who was for a long period the sanghanayak of the Arunachal Pradesh Bhikkhu Sangha. Ven Mahathera was born in January 1947, and breathed his last at the Weingko Buddhist temple, where he was the chief abbot, in August 2019.
Recalling the monk’s tremendous contributions to social and charitable causes, Mein said, “I believe the virtuous deeds of the most venerable one will continue to encourage all to join hands to build a caring and loving community.”
Bengaluru (Karnataka)-based Mahabodhi Society general secretary Ven Ananda Bhikkhu also remembered the late monk as “a humble and very learned teacher who had trained many monks under him.” He expressed hope that the people would be inspired by Ven Mahathera’s teachings and works.
Poi-Leng festival is marked by the pulling of a specially designed chariot, which is a catafalque where the mortal remains of the departed monk are kept. At the end of the festival, the chariot will be put to fire, bringing to end the late monk’s monastic journey.
As per tradition, the mortal remains were kept in a makeshift temple after embalming. On the first day, the coffin was transferred from the makeshift temple to the chariot after performing prayers. People from various places in Arunachal, Assam and Tripura have thronged the venue, and the organisers are expecting more participation in the coming two days.
Khamti chief Chow Khancheng Namchoom, MLA Chau Zingnu Namchoom, DC Bijoy Talukdar and SP Ankit Singh also attended the festival’s inaugural event.
Earlier, Mein released the festival souvenir. The day concluded with a cultural show. (DCM’s PR Cell)