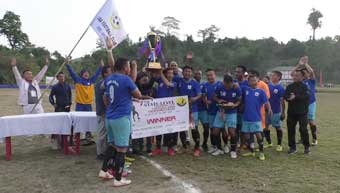 CHIMPU, Jan 23: The Arunachal Pradesh Police (APP) team lifted the 7th State Level Veteran Cup Football Tournament trophy for the second consecutive time after defeating LABA FC 2-1 in the final held at the BN Ground on Thursday.
Dojum Nomuk of APP scored the first goal in 64th minute, but LABA FC’s PG Basumatry managed to equalise with a goal in the 69th minute.
Tage Tath managed to score the winning goal in extra time for APP.
Notably, LABA FC was the runner-up team last year as well.
With six goals to his name, Dojum Nomuk was awarded the ‘highest goal scorer’ award.
Bhagirath Bhakta walked away with the ‘Best player of the tournament’ award, while Golom Ete received the ‘best defender’ award, and Unam Saroh was given the ‘best goal keeper’ award.
Naga FC won the ‘fair play team’ award.
Before kicking off the final, Minister of Youth Affairs and Sports Mama Natung lauded chairman Toko Tatung for organising the tournament and said, “The pool of talent that we have will be channelised through such games, and we will make Arunachal Pradesh a sporting powerhouse.”
He also informed that the football stadium in Yupia, Naharlagun and Sangay Lhaden Sports Complex will be completed soon, “and prestigious tournaments such as this can be held there.”
Capital Deputy Commissioner Komkar Dulom also exhorted on the players to stay fit and spoke on how sports can be a career option.
Tournament chairman Tatung assured to continue the tournament in years to come and provide platform to senior players to give back to the game.
The tournament was organised by E&K’s in collaboration with the Capital Complex Sporting Club, under the aegis of the Arunachal Pradesh Football Association.