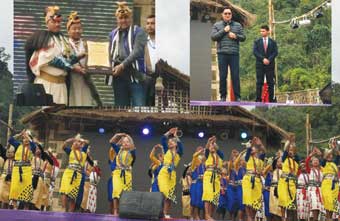 RAMGHAT, Jan 23: The 2nd edition of the Papum Poma River Festival (PPRF) 2.0 kicked off here on Thursday with much pomp and gaiety near the bank of river Poma.
Union Minister of state (Independent) for Youth Affairs and Sports Kiren Rijiju inaugurated the festival.
Addressing the gathering on the occasion, Rijiju at the outset congratulated the organizers of the festival for “their splendid arrangement” and said that “it is an important festival to promote and preserve pristine nature and rich culture of the people, and effort should be made to make it a popular river festival so that people from all over the world can come.”
He also appealed to the people to enjoy the festival with true spirit keeping in view the safety and security of the visitors.
While calling for protection of nature, the union minister also requested the people to shun hunting culture and create more awareness on prevention and preservation of nature and its beautiful species for future generations.
Speaking on promotion of sports and youth affairs activities among the youths of the state, Rijiju also informed about the upcoming Centre of Excellence for boxing, wushu and weight lifting at Itanagar and said that opening of such centre in the state will help the youths to develop their sporting skills so that they can compete at the Olympic level.
Assam Minister for Handloom, Textile and Sericulture, Ranjit Dutta, who also attended the festival, called for strengthening brotherhood by regular exchange of literary and cultural activities between Assam and Arunachal, especially among the people living in border areas. He also underscored the need for development of border roads of the area.
The minister was accompanied by Biswanath district Deputy Commissioner Drubhajyoti Das, Superintendent of Police R Roshan and others.
Speaking on the occasion, local MLA Tana Hali Tara said participation of the delegation from Assam led by the minister will go a long way in cementing ties between the two states. He also called for maintaining age old cultural ties, brotherhood, peace and harmony with each other.
The festival organising chairman, John Panye also spoke on the occasion.
Beside the public, Papum Pare Deputy Commissioner Pige Ligu, Superintendent of Police Jimmy Chiram, HoDs, public leaders, and gaon burahs were also present.
The three days festival extravaganzas will conclude on Friday. (DIPRO)