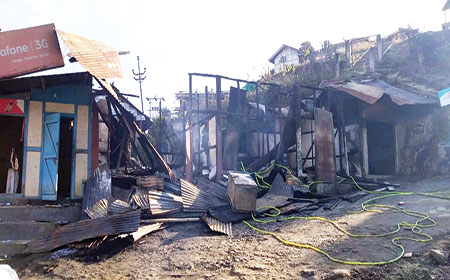 Staff Reporter
RAGA, Jan 29: Numerous shops were gutted in a major fire accident here in the township under Kamle district on Tuesday evening.
Kamle Superintendent of Police John Pada informed that “a kutcha hotel, a computer shop, an electronic repairing shop, and three garment shops were burnt to the ground during the mishap.”
Sources at Raga also informed that the fire broke out around 8 PM on 28 January and burnt down all the belongings of the fire victims.
The SP said that the cause of the fire is yet to be known. “However, prima facie, it appears that a fire was left lit in one of the shops, which accidently spread and gutted down the other shops.”
He added that investigation is on and the district administration is assessing the losses.
Meanwhile, the All Kamle District Youth Association (AKDYA) has in a representation to the Kamle deputy commissioner appealed for immediate relief for the fire affected.
It has also demanded early establishment of a fire service station at the district headquarters.