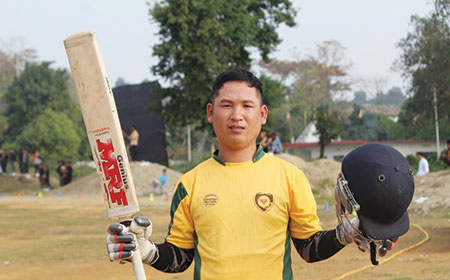 RONO HILLS, Jan 29: Papum Pare beat West Siang by single wicket in the 11th game of the Tado Kholi Inter-district Cricket Tournament played at the Rajiv Gandhi University playgrounds here on Wednesday.
Papum Pare reached the 184-run target set by West Siang to win in the 45.2 over, losing nine wickets.
Lardo Bagra took 5 wickets.
Nabam Nigam of Papum Pare, who scored 59 (4X4), was declared man of the match.
Earlier, opting to bat first, West Siang were all out for 183 run in 35.2 over. Bomken Nino top-scored with 48 runs.
Arun Camdir Teli took four wickets.
At ground no 2, Kurung Kumey beat Tawang by 70 runs.
Kurung Kumey posted a modest 139 run in 37.1 over (all out) after being sent into bat.
Chasing the target, Tawang were bundled out for 69 run in 21.1 over.
Bamang Chungya of Kurung Kumey, who claimed five wicket conceding just 10 runs from five over, won the man of the match title.