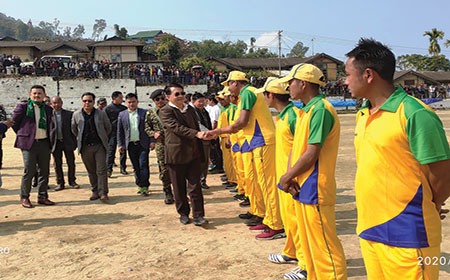 KHONSA, Jan 29: An inter-district T-20 cricket tournament organized in memory of former chief of Lapnan village Lengang Lowang began at Nehru stadium here in Tirap district on Wednesday.
DoTCL Minister Wangki Lowang, who declared the tournament open, hailed the organizers of the tournament for providing a platform to youths to show their talents.
Highlighting the scopes in cricket and various other sports, the minister advised the youth of the district to take up sports sincerely and make career out of them. He also informed the gathering about the state’s government’s sportsperson-friendly programme and policies, including job reservation for meritorious sportspersons.
Earlier, minister Lowang, MLAs Wanglam Sawin, Chakat Aboh, DC PN Thungon, SP Tirap Kardak Riba, Capt. Daniel of 36Bn CRPF lit lamp before the portrait of the late chief.
The opening match was played between Changnyak Cricket Club and Lapnan Cricket Club and the former won the match.
As many as 42 teams are participating in the tournament.
Earlier, chief of Lapnan Gango Lowang read out the brief history of late Lowang.
Lowang, who lost his father at the age of 10 years, was an avid cricket lover. He was elected as Zilla Parishad Member from Khonsa Anchal Block in 2013. He had taken several innovative steps for the development of his village in particular.
As a chief of Lapnan, he had taken a lead role in forming the Women’s Welfare Association at Lapnan, strengthening of the Lapnan Youth Association, maintaining peace and cordial relationship with neighbouring villages.
The market shed at the APST complex here was set up under his initiative for selling organic agricultural and horticultural products. He was also known as the custodian of indigenous faith and culture.
Lowang passed away in a road accident in February, 2018 in Itanagar.
Former Panchayat leaders Chawang Lowang, Sontung Lowang Bangsia, Ngamche Kamhua, Ngelang Songthing and people of Lapnan were present during the opening ceremony.
The tournament has been organized by the chief’s family along with the people of Lapnan village. (DIPRO)