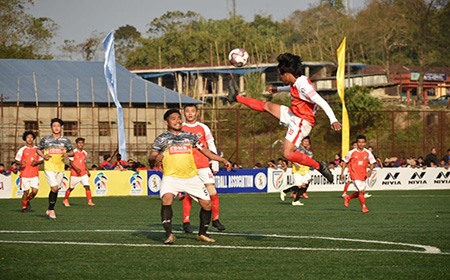 Staff Reporter
CHIMPU, Feb 12: Defending champion Gora Makik SC (GMSC) came from two goals behind to draw 2-2 with Todo United FC in a keenly contested inaugural match of the Indrajit Namchoom Arunachal League (INAL) played at the Sangay Lhaden Sports Academy playground here on Wednesday.
Both teams started the match on an attacking note, creating several scoring opportunities. But, it was Todo United that made most of the advantages as they went into the lead in the 19th minute with a spectacular goal from R Pradhan.
Stung by early goal, GMSC geared up for the equalizer. They created some good scoring opportunities within the first half; but failed to convert them due to poor finishing.
Todo United were leading Gora Makik 1-0 at the end of halftime. They doubled the lead 55 minutes into the play with goal from Tapi Hakhe.
Desperate for the equalizer, the GMSC came out after the interval with all guns blazing. The tide turned the GMSC’s favour, when the referee offered them a penalty kick in the 61st minute. Tame Agung made no mistake to convert the penalty (1-2).
The GMSC again came back into the game by scoring the equalizer in the 88th minute through a free kick by Timmy Rynaklen, forcing Todo United to split points.
Earlier, speaking at the inaugural function, Chief Minister Pema Khandu described Namchoom a legendary football player and hailed the Arunachal Pradesh Football Association (APFA) for renaming the Arunachal Super League after Namchoom.
Khandu said that his government has always accorded top priority to development of the sports sector.
“The state government is planning to build at least one state-of-art football stadium each in every district,” he said.
Responding to a memorandum submitted by APFA, the chief minister announced that the Indrajit Namchoom Arunachal League would be a calendar event from the next year (2021) and Rs 30 lakh would be granted for organizing the league.
Appreciating the APFA for organizing the tournament in a befitting manner, Speaker PD Sona said it should be organized in a more vibrant and professional manner to put the young players in a position to kick-start their career in football.
Highlighting the importance of sports, he said sports help the players develop discipline, team spirit and foster unity and friendship. He hoped sports in the state under the leadership of Chief Minister Khandu, who himself is the president of APFA, would achieve greater height in the days to come.
Deputy Chief Minister Chowna Mein gave a brief history of Namchoom’s life. Mein said Namchoom created a niche for himself in football during the latter part of the 50’s and 60’s.
Mein informed that Namchoom had played for major clubs in Guwahati, including the Guwahati Town Club. He also captained the Indian Junior team and led the national team in Saigon, Vietnam and Malaysia during 1964.
He also recalled many players from Namsai district, who had played football and created a niche for themselves, including his elder brother late Sujit Gohain Mein.
The DCM informed that he had urged MoS (independent) Youth Affairs and Sports Kiren Rijiju to sanction one out of the 12 sanctioned football stadiums at Namsai to be named after Indrajit Namchoom.
Dr G Phukan from Assam, who played alongside Namchoom, recalled that Namchoom possessed all the good qualities that a football player should have. Namchoom was a very soft spoken person for which he was loved by all, he said.
Phukan urged the state government to recommend Namchoom’s name for the Arjuna Award.
The inaugural match was also witnessed among others by, Sports Minister Mama Natung, Dy Speaker Tesam Pongte, MLA Ninong Ering.