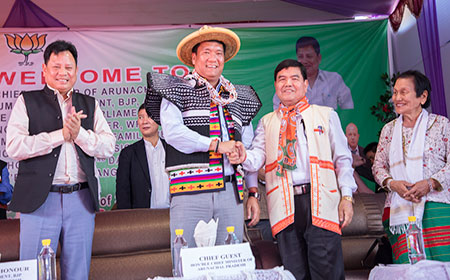 [ Prafulla Kaman ]
MEBO, Feb 29:The government is committed to reform corrupt systems in the government machinery through ‘transparent conduct of the official activities,’ said Chief Minister PemaKhandu in his address at the Bharatiya Janata Party (BJP) meeting of Mebo constituency held at Ngopok village in East Siang district on Saturday.
Party politics badly affected the state’s economic development, Khandu opined, and said that “the Congress government, who had ruled the country for more than 30 years, used the region for money minting exploiting the resources”.
He added that “Congress government had used Arunachal Pradesh and other NE states as money minting machine, but the BJP is putting priority to develop link surface communication of the area”.
Referring to the reported irregularities in Staff Selection Board’s recruitment in government services, CM Khandu said, ‘There was no fault in policy making, but corruption is reigning due to unscrupulous government officials.’
‘My government is committed to reform the existing systems and bring transparency in conduct. Step has been taken to punish guilty officials involved in malpractices,’ he added.
Stating that Mebo area in East Siang is resourceful, Khandu assured the local people to implement government schemes in order to develop the area in all fronts.
Earlier, public leader Dr. Dangi Perme, requested the CM to strictly monitor the ongoing ‘anti-erosion project’ worth Rs. 35 crores being implemented at Mebo, while former MLA Ralom Borang appealed the CM to set up cane and bamboo industry in the area for economic uplift of the local unemployed youths and woman SHGs.
The meeting was also attended, among others, by Lok Sabha member Tapir Gao, state BJP president Biyuram Wahge, MLAs Zingnu Namchoom, Kaling Moyong and Gum Tayeng.
Later, the CM along with the MP and other BJP leaders attended a meeting at Seren in Nari-Koyu constituency bordering to Dhemaji in Assam. (with inputs from CM’s PR cell)