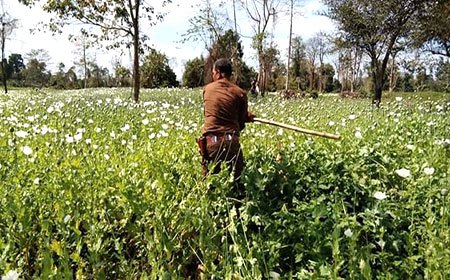 [ Pisi Zauing ]
NAMSAI, Feb 29: Lohit and Namsai district administrations with the help of police and para-military forces destroyed poppy plantations that were grown across more than 1000 hectares in the Khado area between Lohit and Kamlang river here on Saturday.
Around 500 labourers were hired to destroy the extensive plantations, whose value is estimated to be crores of rupees.
The team was constituted and put into action by Namsai and Lohit administrations along with Narcotics Control Bureau, tax & excise, and forest departments.
Though the island is well-known for poppy cultivation, such drive had never been carried out before.
The poppy cultivators felled trees in order to block the approach road and prevent the team from carrying out the drive.
No arrest has been made as the cultivators fled the scene before the police team arrived.
On Wednesday, the Namsai district authority carried out similar drive, during which 400 hectares of illegally grown opium poppy plantations were destroyed in the Lohit reserve forest area of Namsai district.
Opium destruction is a part of the administration and Narcotics Control Bureau’s effort to stem opium production in the state.