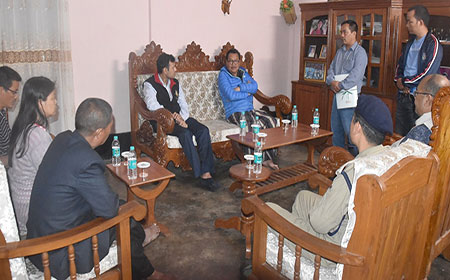 WAKRO, Mar 7: Deputy Chief Minister Chowna Mein on Saturday met the family of former Wakro anchal samiti (AS) chairperson, Balijan Krisikro, who went missing on 15 February from the Parshuram Kund area in Lohit district and still remains untraceable.
Expressing solidarity with the grieving family members, Mein said the government is extending all possible support in carrying out search operation and investigation of the case.
“The case has been handed over to a special investigation team (SIT), and if the situation demands, the SIT will be reinforced to further expedite the investigation,” Mein said.
Later, during a meeting with the DCs and the SPs of Lohit and Namsai districts and a few public leaders of the area, Mein urged the officers to intensify and extend the search operation beyond Lohit, to Anjaw and Namsai districts.
Lohit SP DW Thongon informed that since the time of filing of the missing person FIR at the Wakro police station “the police and the district administration along with the public have been intensively carrying out searches, and a lookout notice for the missing person has been sent to all the SPs in India through the police headquarters in Itanagar.”
A regular case of kidnapping was registered at the Wakro police station on 1 March, and the case was handed over to the SIT on 2 March.
The SP said the search operation will continue. (DCM’s PR Cell)