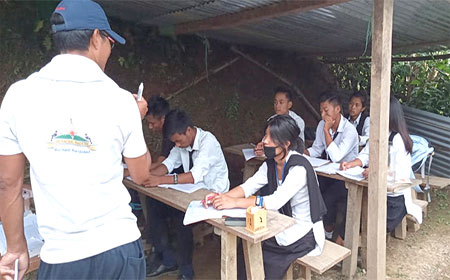 [ C Chingsaham ]
Very few people can manage to serve the society while they have their own struggles to deal with. However, such is the story of Chanphua Wangsu, a young man from Longkhaw village in Longding district, who has been providing free tuitions to students in his community.
With a master’s degree in economics, Wangsu has been teaching economics to Class 11 and 12 students while at the same time conducting career counselling classes in the congested veranda of his framed bamboo house. He has been dedicatedly serving the students in his community by imparting free education to a batch of over 20 students every year since 2017.
A man of limited means, Wangsu has been raised by his widowed mother ever since his father, who was a farmer, passed away when Wangsu was merely a year old.
Before Wangsu began providing free classes, he started off by offering tuitions in 2014 to make an earning, soon after completing his master’s degree from the Don Bosco College (DBC) in Maram, in Manipur.
However, he soon realized that it was benefitting no one.
“I was neither earning enough, nor was it beneficial for the students as many students failed to pay the fee and left the classes halfway due to impecunious family conditions,” he says, as he recalls how he himself went through similar conditions in the past and had wished for free education during his school days.
After struggling for a few years with his paid tuition classes, he decided that it was time to switch plans, and he began providing education to the students in the area for free.
“I had to go through a lot of challenges just to complete my schooling. I passed Class 10 with a compartment paper even after putting in so much effort. Since my foundation in certain subjects was weak, I could not understand a single sentence, and I would try to remember each and every sentence by heart,” says Wangsu as he recalls how he gradually took the decision to provide free tuitions.
The turning point in his life came when a parish priest in Longding helped him get admission in the Maram DBC.
“I was blessed with genuine friends in the college, who taught me with patience. The parish priests were also like my second family.
They taught me so much, and sometimes helped me financially,” Wangsu says, and tells us how he would stay back in the college during vacations due to financial constraints.
While Wangsu is now married and lives with his wife and mother, the family still lacks a concrete income source but manages through any big or small opportunity that comes along.
Wangsu’s hard work has not gone unnoticed, though. Captain Dheraj Sihag of the 19th Sikh Regiment, based in Longding, and his team, have acknowledged Wangsu’s service and provide notepads and pens to his students in appreciation. Other than that, no one has offered him any help for his tuition classes.
Wangsu believes that a society needs more educated, intellectual men and women, rather than mere degree holders, as they are the ones who can help bring harmony and development to an area.
As we come towards the end of our conversation, Wangsu says he hopes to establish an NGO if people are ready to support his venture of educating financially weak students who have been long deprived of education. (The contributor is a 2nd semester student in the mass communication department of Rajiv Gandhi University, Rono Hills.)