ITANAGAR, Apr 20: Chief Minister Pema Khandu on Monday inaugurated the revamped bridge over the Subansiri river in Upper Subansiri HQ Daporijo through videoconference.
The bridge had been in a dilapidated shape, and movement of vehicles over it had been restricted in view of its fragile condition. 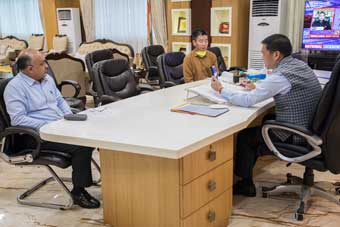 The bridge is the only line of communication to Daporijo and villages located on the other side of the Subansiri river. It also connects the Siang belt with Upper Subansiri.
Earlier, the state government took up with the Centre the matter of the bridge’s condition, and the Border Roads Organization (BRO) was subsequently entrusted with the task of reconstructing it. After taking it over from the PWD, the BRO started work on the bridge on 17 March this year, under Project Arunank.
Khandu lauded the BRO for completing the work within such a short period of time, in spite of facing various problems due to the nationwide lockdown.
He also commended the district administration for extending cooperation to the BRO in completing the work.
“Now that this strategic 430 feet multi-span bridge is completed, hassle-free communication is restored to Daporijo and around 451 villages, as well as all the forward locations along the LAC where our security forces are deployed,” the CM said.
He expressed deep gratitude to Project Arunank Chief Engineer, Brig AS Chonker, 23 BRTF Commander, Col Satyan Sundaran, and 77 RCC OC, PN Sahu, “for their prompt and personal interest in carrying out the construction work.”
The bridge has been named after martyr Hangpan Dada, who laid down his life fighting terrorists in Jammu & Kashmir, and was posthumously awarded the Ashok Chakra. (CM’s PR Cell)