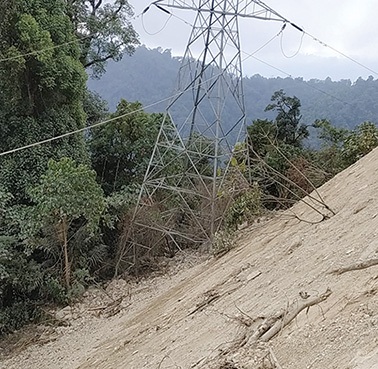 Staff Reporter
ITANAGAR, May 22: Following incessant rainfall and storm, East Kameng and West Kameng districts are reeling under complete darkness as the power lines have been snapped.
Junior Engineer, electrical department Bomdila Division Pormar Gadi informed that the rainfall and storm triggered heavy landslide at multiple locations and many trees were uprooted which caused damage to the transmission lines between Sedal and Sessa in West Kameng on Thursday evening.
The 132 KV line supplies power to both the districts from Power Grid Corporation of India Limited (PGCIL) Balipara, Assam.
The restoration team has reportedly been unable to access the area due to multiple blocks at the Sessa to Sedal stretch of road.
“The restoration team had started from Bhalukpong early morning today towards Sedal, but could not proceed further due to heavy blockades” said JE Gadi
“They tried from Kimi side too, but the road is blocked between Nechipu and Sedal hence, the team is unable to reach the area where the power lines have snapped” Gadi added.
The electrical department has requested the district administration to give direction to the road executing agency to clear the block so that restoration is done at the earliest.
TCC road construction agency is carrying out road construction in the stretch while Mega Electrical Ltd. is looking after the maintenance of the 132 KV line from Balipara to Khuppi under the NEEPCO.
Deputy Commissioner West Kameng Karma Lekhi has confirmed the disruption of power supply in the district.