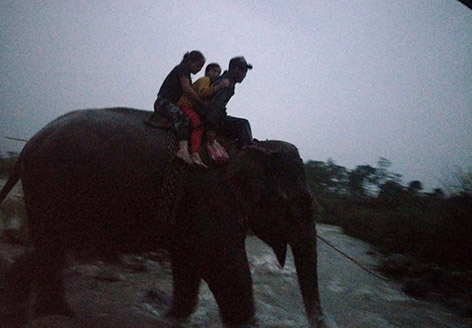 Staff Reporter
TEZU, May 26: Two young girls had to be rescued from Tezu Nallah here in Lohit district on Monday evening by the administration as they were stranded in the river.
As the river is in spate, an elephant had to be requisitioned in the rescue operation carried out by the Lohit unit police and the district disaster management authority.
DDMO Damchen Norbu said that the girls were trying to cross the main river near Shivajinagar after crossing streams. But then they could not cross it as the river was flooded.
As they were trying to return, the streams which they had crossed earlier were flooded too.
An SOS was sent to the Tezu police station by the citizens, following which, the police swung into action, Norbu said.
The district administration had already warned the people not to venture into the river because of the heavy rains.
DC Prince Dhawan has banned people from venturing near the rivers as the Lohit and its tributaries-Tezu Nallah, Denning, Sukha Nallah and Digaru, are in spate.
On Monday, 18 people from 28th Mile Machuwa camp were shifted to safer locations.