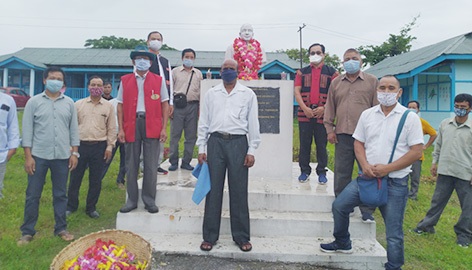 SILUK, Jun 1: A group of around 25 people, comprising village elders and members of the Silukian Welfare Kebang (SWK), the Swacch Siluk Abhiyan and the Siluk Dolung Yameng Kebang celebrated the 81st birthday of literary doyen, late Lummer Dai, here in East Siang district on Monday.
Siluk is the birthplace of Dai.
The programme featured lightning of diyas and candles, and garlanding the statue of the literary luminary at the upper primary school here.
Paying rich tributes, Siluk HGB Ashik Yirang described Dai as “a scholar, a writer and an able administrator.”
Dr Nong Borang from BPGH said that “the legacy of ‘Sahitya Surya’ Lummer Dai should be carried forward by encouraging young ones in the literary field.”
He described Dai as a “great humanist who reflected in his work the woes and challenges of the downtrodden and the women in the society, thereby strongly advocating for their rights and self-determination.”
East Siang DDSE Jongge Yirang, who was also present, said: “(Dai) was exceptional and could write exactly what he thought – which is a quality that normal people do not have. He built a bridge between Arunachalee and Assamese societies through his brilliant literary works, which need to be cemented by us to keep the goodwill alive.”
SWK Siluk unit president Jojong Borang said everyone should read the book Kanyar Mulya, written by Dai, “which tells about the value of women.”
He also exhorted the younger generation to take up writing.