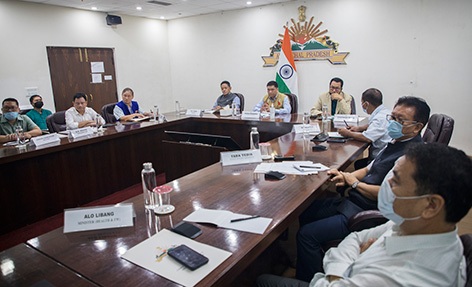 ‘Schools will not reopen before August’

ITANAGAR, Jun 18: Chief Minister Pema Khandu discussed issues such as reopening of schools and colleges, guidelines for the return of stranded people, hiring of labourers, quarantine facilities, sample testing, etc, with various stakeholders during a meeting here on Thursday, in view of the end of ‘Unlock 1’ on 30 June, when the state will slowly open up for normal activities.
This comes after Prime Minister Narendra Modi in a videoconference on Tuesday asked the states to prepare for ‘Unlock 2′.
During the meeting, which was attended by the leaders of all political parties, community-based organizations represented by the Arunachal Indigenous Tribes Forum, and members of the All Arunachal Pradesh Students’ Union, the CM sought suggestions for finalizing the standard operating procedure (SOP) post 30 June.
Most of the participants emphasized that ‘the war’ is not over and the government still needs to approach with caution the matter of opening up normal activities.
Khandu gave assurance that all the suggestions offered by the participants would be considered while finalizing the SOP for Unlock 2.
The CM informed that about 14,000 stranded people have returned to the state.
“They were put under institutional quarantine, and sent for home quarantine only when they tested negative for two consecutive times, as per the prevailing SOP,” he said.
The CM said a timeline would be given for the people who are outside the state to return, “probably by 30 June.”
“Those returning after the timeline will have to bear the minimum cost of institutional quarantine. However, the state government will continue to bear the expenses of the swab tests.
At the moment, all expenses, for both institutional quarantine and tests, are being borne by the state government,” Khandu said, adding that the five-day mandatory institutional quarantine, followed by RT-PCR test of swab samples twice, would be applicable to all returnees, including government officials of all ranks.
The chief minister further said that providers of essential services such as telecom, power, healthcare, etc, along with technicians and labourers hired for essential services will also need to follow the SOP.
“As far as reopening of schools is concerned,” Khandu said, “schools will not reopen before August. The government will take a review on prevailing conditions in July and decide after receiving guidelines from the human resources ministry. Colleges under Rajiv Gandhi University will reopen as per directives of the University Grants Commission.”
He said the pandemic has made the state government realize the significance of a robust healthcare system and the importance of self-sufficiency. “We as ‘Team Arunachal’ are committed to seriously work in these two sectors,” he said.
Deputy Chief Minister Chowna Mein, Speaker Pasang D Sona, Home Minister Bamang Felix, Health Minister Alo Libang, Education Minister Taba Tedir, state Congress president Nabam Tuki, state BJP president Biyuram Wahge and general secretary Chow Zingnu Namchoom, PPA chairman Kamen Ringu, NPP president Gicho Kabak and vice president Nima Sangey, JD (U) president Ruhi Tugung, the chief secretary, the DGP, the home commissioner, the health secretary, the education secretary, and officials of the state Covid task force and the health department also attended the meeting. (CM’s PR Cell)