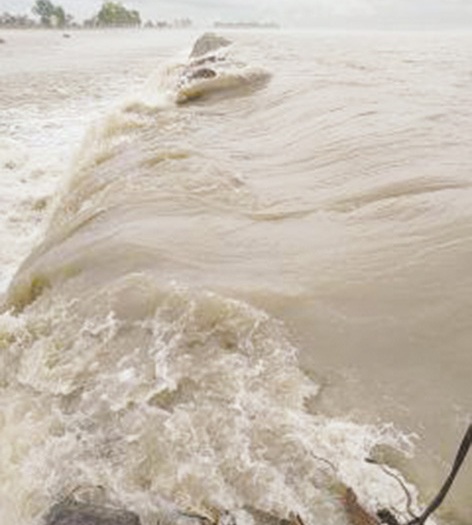 Correspondent
PASIGHAT, Jun 23: Overflowing water of the Siang river breached the boulder bund at Sigar, in Mebo subdivision of East Siang district, on Tuesday morning.
The breaching of the bund has posed a serious flood and erosion threat to Sigar, Ralling, Motum, Kiyit, Borguli, Seram, Kongkul, Namsing, Gadum and Mer villages.
The DoNER ministry had granted a one-time financial assistance of Rs 35 crore for flood protection work in Mebo, out of which Rs 30 crore has already been released. The bund had been built as part of the flood protection measures.
Allegedly, the construction agency diverted the original alignment of the bund and lowered the height and span of the boulder spurs, due to which the overflowing water of the river breached it.
“The flood protection works were done under the supervision of the local MLA. The local villagers had vehemently opposed the reduction in the bund’s height and span, but the contractor did not pay heed,” said local public leader Shoney Pertin.
It is said that there was a district-level committee to monitor the construction activities.
The river has already swallowed several acres of fertile cropland in Motum, besides eroding more than 50 houses in Seram and Kongkul villages in the last couple of years.
More than 100 families of the subdivision have already been displaced due to flood and erosion by the river.
The Siang was flowing close to the danger level at Komolighat near here on Tuesday evening, the water resources department (WRD) said.
DIPRO adds: East Siang DC Kinny Singh on Tuesday reviewed the overall flood situation with the district’s incident response team.
Singh directed the WRD to carry out a survey and urgently repair the bund at Sigar.
The DC has issued a flood advisory, cautioning the public against venturing into the Siang and other rivers and streams for swimming, fishing, or any other activity.
The administration has also advised the people living in the low-lying areas along the riverbanks, particularly in Sigar, Borguli, Seram, Kongkul, Namsing, Mer, Jarku, Paglek, SS Mission, Jarkong, Banskota, Berung and other areas to remain alert against possible flood. The people have, however, been advised to not panic.
The administration has directed that driftwood and any other vegetative materials carried down by the river and deposited along the banks should not be lifted, as they would serve as natural barriers against flood. Action will be initiated against violators under Section 188 IPC and other relevant provisions of the law.
The central water commission and the WRD have been directed to furnish reports every four hours. All incident commanders have been directed to furnish a daily situation report at 3.30 pm.
The PWD EE has been directed to ensure that the roads remain open, while the PMC EE has been directed to clean and de-silt drains and take care of urban flood control management.
The urban flood control management cell, comprising the PMC EE, the EAC (Judicial), the CO (Sadar), the FO (DM) and the Pasighat PS OC, will be responsible for urban flood management and mitigation.
The smart city CEO has been directed to install portable dewatering pumps in Pasighat town, while the DFCSO will ensure availability of essential food supplies. All administrative officers in the outposts have been advised to remain alert.