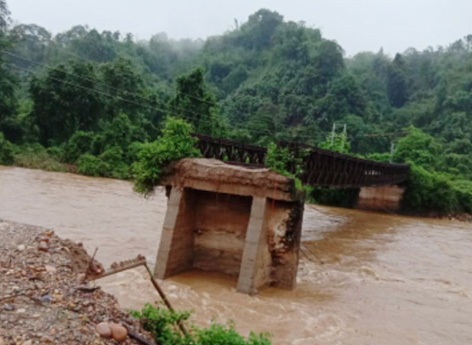 Correspondent
PASIGHAT, Jun 24: The increasing water level of the mighty Siang River due to heavy downpour at the upper reaches is posing a serious threat to the entire Mebo sub-division on its left bank.
The rivers and perennial streams of the region, including Kadang, Ngopok, Sisar and Taro-Tamak are swelling due to torrential rain for the last few days which ultimately increased the water level of the Siang River.
Overflowing water of the Siang River, which breached a boulder bund at Sigar on Tuesday, is eroding community plantation on the left bank of the river. The erosion posed by the river is reaching closer to the Siagar school building and playground, besides the community burial ground.
The river water is also taking critical turns at Raling, Motum, Kiyit, Borguli, Seram, Kongkul, Namsing villages in its downstream.
Recurring flash floods caused by the Siang River in the last two years have left a trail of devastation at Serum, Kongkul and Mer-Gadum villages.
The East Siang district administration also issued an advisory on Tuesday and alerted the people of the district to refrain from venturing into the Siang for fishing, swimming and avoid collection of dripped-wood, trees and bamboos etc.
It also asked the people dwelling in low lying areas to stay alert.
On the other hand, overflowing water of Sille River in Ruksin circle eroded the right abutment of the Bailey bridge at Niglok and snapped road communication between Ruksin and Bilat areas.
The turbulent river flowing down from Mirem hill site also flooded Leku Jelom area of bordering Assam at the downstream.
Earlier too, surging river water had eroded the same portion of the Bailey bridge for three consecutive years.
During the visit of Ruksin ADC Kabit Apang to the area, Niglok Head Gaon Bura Talung Saroh appealed to the ADC to immediately restorate the bridge as it is very essential for medical emergencies.
Meanwhile, East Siang Deputy Commissioner Dr Kinny Singh directed the PWD Executive Engineer (EE) for immediate restoration.
After field visit, EE Tani Taki informed the DC that the approach road towards Niglok site has been completely damaged and it would take at least 10 to 15 days.
He has asked the Ruksin administration to issue travel advisory for the public not to use the MMR road till connectivity is restored.