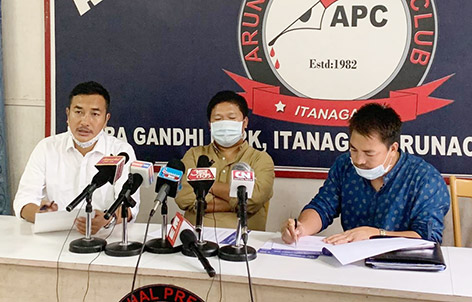 Staff Reporter
ITANAGAR, Jul 1: The All Arunachal Pradesh Students’ Union (AAPSU) on Wednesday called for at least three to seven days lockdown of the Capital Region till contact tracing of those who came in contact with the two Covid-19 positive health workers at the Lekhi State Quarantine Facility is completed.
The AAPSU warned that the situation is precarious and the lockdown is the only option to contain the virus before it spreads to the community level.
Addressing a press conference at the Arunachal Press Club (APC), AAPSU general secretary Tobom Dai said, “We are demanding that the district administration and the state government impose three to seven days of lockdown because the capital region is vulnerable as people are callous”.
The AAPSU team reportedly called on Capital Region Deputy Commissioner Komkar Dulom on Tuesday asking him to impose lockdown before the virus spreads in the community.
Expressing concern over reported threats and messages to family members of two frontline workers who have tested positive, AAPSU vice president Meje Taku appealed to the people to give moral support to the two workers who got infected, instead of harassing and threatening calls.
“They had not gone to the SQF for enjoyment but for the safety of our health. Instead of supporting and praying for them, it is unfortunate to know that many are writing distastefully on social media,” he said, adding: “We appeal to the people to support them and pray for them in this hour of crisis.”
It also demanded isolated accommodation facilities for frontline workers working at quarantine centres, adding that frontline workers that go back home after work put their families at risk as well.
The AAPSU further urged the government to make testing mandatory for all the truckers and drivers entering into Arunachal at check gates using rapid anti-body tests.
The state apex students’ organisation also demanded that RT-PCR testing facilities be made functional in the districts.
On hospital infrastructure development, the AAPSU called for immediate implementation of health infrastructures through proper tender.
AAPSU president Hawa Bagang also highlighted that the public in the capital region is not taking the coronavirus seriously.
“People should realise the magnitude of this deadly virus. When there was no case of Coronavirus, people locked themselves up, but people are on the streets as the cases spike.”
Bagang appealed to the citizens to follow the safety measures issued by the administration and health department and extend cooperation.