India and China have an acrimonious relationship over last 60 years. The major conflict was the Sino-India war of 1962, when the Chinese forces entered almost 100 kms inside India. There have been regular clashes at Nathu La in Sikkim in 1967, in 1987 at Sumdorong Chu in Arunachal, the 73-day Doklam confrontation in 2017, and Chinese incursions in Asaphila, Tuting and Chaklagam areas of Arunachal in 2017-2018.
Recently the Sino-India conflict flared up in the last few months at Pangong Tso lake in Ladakh, in north Sikkim and violent clashes in Galwan Valley during the night of 15/16 June, which resulted in 20 Indians soldiers and 40 plus Chinese soldiers killed. A tense situation exists all along the Indiao-China border.
Amidst a national movement for boycott of Chinese products and applications, the electronic and social media is full of shrill nationalist anti-China rhetoric. The moderate, pacifying voices and opinions are being subdued by warmongering, hardliner opinions.
China is a major world power with the largest military of the world, and is the second largest economy in the world. China’s defence budget is four times India’s defence budget, and military infrastructure is better developed in Chinese side. Both nations are major nuclear powers, armed with many ballistic missiles. A major India-China conflict would be disastrous for both nations.
A brief comparison of military forces of both nations is tabulated below: 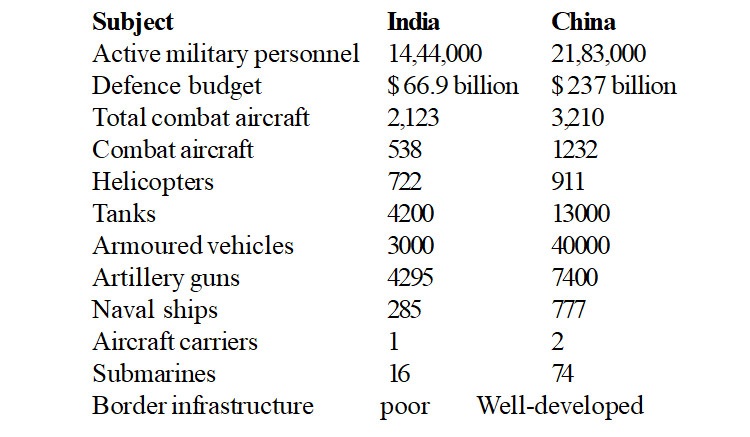 While both sides claim and counter claim military superiority, many experts opine that both nations are major powers and any major conflict will lead to loss of thousands of lives and massive property loss on both sides, combined with uncountable misery and suffering.
Avoiding a major conflict is more relevant due to the ongoing Covid-19 pandemic, wherein both India and China are affected with millions losing jobs and economies in recession. A major India-China conflict should be avoided by tactful diplomacy.
The options for India are to mobilize world opinion against Chinese aggression and hope that major world powers give us physical and moral support. The USA and allies must keep their forces deployed in the South China Sea to keep major portion of Chinese forces occupied in the region.
We in Arunachal and Assam are directly affected since the battleground would be here! We should follow the teachings of our own Chanakya and practice some Chanakya niti to avoid a war. Chanakya niti dictates that we counter China with economic boycott and diplomacy. War must be the last option only after all other ways are ruled out. All Arunachalees would agree that a repeat of 1962 must be avoided. (The contributor is retired Group Captain, Indian Air Force)