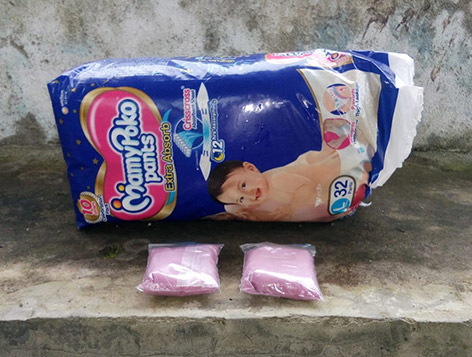 CHANGLANG, Jul 7: The anti-drug squad of the Changlang police arrested a drug peddler with suspected brown sugar during a naka checking in Rangkatu area along the Margherita-Changlang road on Tuesday.
The naka was established by the squad, led by SI L Bolok, under the command of Changlang SP Mihin Gambo, after receiving reliable input about the movement of a drug peddler on the route.
“During the checking, the team intercepted a Tata Sumo car (AR-12-2692), which was coming from Namdang, and recovered two polythene packets containing pink power, suspected to be brown sugar, weighing approximately 97 grams,” informed SP Gambo.
The contraband had been hidden inside baby diapers in a sealed packet.
During interrogation, the peddler, identified as Gopang Ngemu (36), a resident of Yanman village in Khimiyang circle, said the illicit drug had been procured from a drug peddler based in Assam.
The car’s driver, identified as Gopal Thapa (30), was also arrested, and the contraband and the vehicle were seized.
A case under the NDPS Act has been registered at the police station here.
Earlier, on 12 June, the Changlang police had raided the market area here and arrested an ENNG sympathizer, identified as Syam Gurung (30).
“The police recovered Rs 3 lakhs from his possession. The money is suspected to have been extorted from the public on behalf of the underground organization,” the SP said.