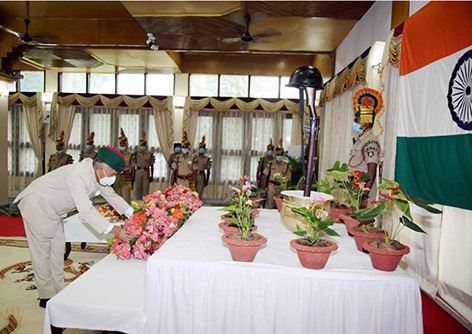 ITANAGAR, Jul 26: The 21st Kargil Vijay Diwas was observed in a befitting manner at the Raj Bhavan here on Sunday.

Among others, Governor BD Mishra, DCM Chowna Mein, APPSC member GS Bisht, Commissioner to Governor HGS Dhaliwal, and officials and staff of the Raj Bhavan, along with ITBP personnel laid wreaths and offered floral tributes to the Kargil War heroes at the Amar Jawan cenotaph at the Raj Bhavan.

Speaking on the occasion, the governor recalled the valour and sacrifices of the Kargil War heroes and their sense of duty towards the sovereignty and territorial integrity of the country.

Special mention was made of Naik Digendra Kumar of the 2 Rajputana Rifles, who led the assault for recapturing the crucial Tololing Top in the Kargil War.

“The credit of the Kargil victory goes to every soldier who fought with full preparedness to make supreme sacrifice for the safety and security of the nation,” Mishra said.

He called upon the people not to forget the sacrifice of the gallant soldiers. “It is the duty of every citizen to stand with the soldiers guarding the borders,” the governor said.

Mein in his speech said that “the thoughts, prayers and good wishes of the people of Arunachal Pradesh are always with the 527 families of the Kargil War heroes who laid down their lives in the line of duty to protect our country’s territorial integrity.”

The commissioner to governor also spoke.

The ITBP personnel presented shok shastra and salami shastra and sounded the Last Post and the Rouse Reveille bugle calls. A short film on the Kargil War was shown during the programme. (Raj Bhavan)