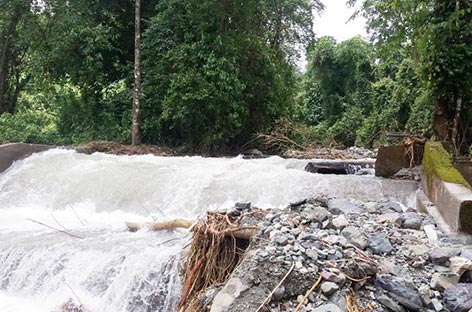 RUKSIN, Aug 2: About 100 residents of Mirem, Bilat and Ledum villages in Pasighat West area of East Siang district on Sunday repaired the headworks of the ‘mega water supply project’ in Ledum.

The headworks, along with the reservoir and the water supply pipelines of the project were badly damaged during the mid-July rains this year.

The villagers voluntarily repaired the damaged headworks, removed the debris left behind by landslides, cleared the blockages in the pipelines, and partly restored the system.

The project was supplying drinking water to a population of 16,000 in 30 villages in Ruksin subdivision. The villagers are now facing a drinking water crisis.

Pasighat West MLA Ninong Ering, who visited the site on Sunday, sought help from the higher-ups of the state’s PHE&WS department for the project’s renovation.

“I have appealed to Chief Minister Pema Khandu and the PHE minister to pay attention to the water problems faced by the local villagers,” Ering said.

The water supply project in Ledum, worth Rs 20 crore, had been sanctioned in 2007. It was implemented by the Pasighat PHED division, which made the project functional as late as in 2014.

There was massive public ire over the inordinate delay in completion of the water project, and the state government had granted an additional fund of Rs 2 crore under the special plan allocation to complete the work.