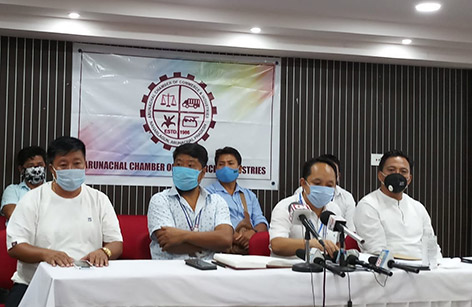 NAHARLAGUN, Aug 7: Claiming that the state government has not taken any step to address the various issues raised by the state’s business community, the Arunachal Chamber of Commerce & Industries (ACCI) on Friday said it would be compelled to declare a 72-hour shutter-down strike by all business establishments in the entire capital region as a protest.

The ACCI gave the government two days, starting Friday, to initiate the measures which had been suggested by the apex body of traders earlier in separate memorandums submitted to the chief secretary and the deputy chief minister.

Addressing reporters at a city hotel here, ACCI president Tarh Nachung informed that the nationwide lockdown since 25 March has hit the business community the hardest.

“The state’s traders are also suffering, and as the state’s apex body of traders, the ACCI has sought the support of the state government and has submitted representations to the DCM and the CS, but there has been no response from the government yet,” he said.

The ACCI had on 27 April written to the DCM, demanding a Covid-19 working capital gap funding for business enterprises as relief. It had also submitted a six-point memorandum to the CS on 31 July.

state government in its fight against the Covid-19 pandemic since the first phase of lockdown in March.

“From complete shutdown of businesses to following left/right side rules for opening and closing of shops despite hardships, the business community under the ACCI has also been extending all possible support to the state government during the lockdown to ensure availability and adequate supply of essential commodities and other materials in the state,” he said.

“The ACCI also initiated and volunteered coordination with the health department for mass testing of business community members in the ICR and adjoining areas for Covid-19, which has been hailed as a remarkable and much-needed step in containing the spread of the disease,” Tatung said.

Speaking about the ACCI’s demand for gap funding, Tatung said that the ACCI had on 6 May held a meeting with the DCM to discuss the modalities of the financial package, and a committee had been constituted to look into it.

“It was assured that the ACCI would be informed once the central government relief package is announced. However, the ACCI has not received any communication as yet regarding the same, although a financial package of Rs 20 lakh crore has been announced by the Centre.

“The ACCI also reminded the state government regarding the same in its representation to consider the proposal which is a much-needed step in the right direction in view of the liquidity crisis faced by the business community, and to avert a possible insolvency crisis in the state, but till date the state government has not reciprocated in the matter,” Tatung said.

He further said that the ACCI’s demands for a review of the status of auto-renewal of statutory licences and streamlining of the process of re-validation of inner line permits for incoming staffers of various business establishments and shops are also yet to be fulfilled.

Tatung suggested to the state government that finances could be arranged through market borrowing, as the state is now allowed to take 5 percent of GSDP.

“Our market borrowings were always less than 10 percent of total expenditure, like Delhi and Mizoram. We could be a bit enterprising and work on ways to pay back. We could also tap into consolidated sinking fund (CSF) and guarantee redemption fund (GRF) in the RBI and avail special drawing facility (SDF),” he said.

“Regarding the state’s standing as sovereign guarantor, as mentioned in the Covid guarantee gap funding working capital fund, if we see the statistics, Arunachal Pradesh recorded a decline of 11 percent and as of now it stands at zero. We have no liabilities. We can explore this option too, thereby giving strong reason to banks to finance the working capital as mentioned, as by definition the state cannot default,” Tatung added.