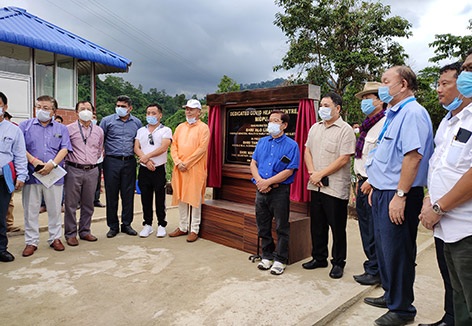 MIDPU, Aug 7: After months of delay, the dedicated Covid health centre (DCHC) here in Papum Pare district was finally inaugurated on Friday. The construction of the prefabricated hospital had started in mid-May.

The DCHC will cater to patients with mild symptoms of Covid-19. The prefabricated hospital has seven cabins with five beds in each, making it a 35-bedded hospital.

Health Minister Alo Libang, who inaugurated the facility, commended the construction agency, the PHED, for completing the work within a short period of time. He also thanked the people of Midpu for donating land for the construction of the hospital, and gave assurance that once the encroachment issue is settled, the entire stretch would be properly fenced.

The minister said the DCHC “is fully ready to start admitting patients.”

Libang also informed that the Covid hospital at the MLA apartments will start functioning from 12 August.

Doimukh MLA Tana Hali, who accompanied Libang, said the Papum Pare administration would extend every possible help to reclaim all the land belonging to the health department that has been encroached on in Midpu.

“We will extend cooperation, and I hope that the land department will make good use of the land donated by the villagers of Midpu,” he said.

Hali also appealed to the health department to approve the construction of the district hospital for Papum Pare.

Health Secretary P Parthiban informed that the decision to construct the DCHC and the Covid hospital at the MLA apartments was taken after a case of doctors at the TRIHMS testing positive for Covid-19 was reported.

“The TRIHMS caters to major healthcare needs of the people of the state. Therefore we wanted to keep it free from Covid,” he said.

The secretary also clarified the matter of the funds sanctioned for the DCHC.

However, he said several new structures were added at the last minute, based on the requirements of the health department.

“For these added structures, estimates will be prepared based on the market rates,” the secretary said.

“Though the hospital has been constructed within a short period of time, there has been no compromise with the quality,” he said.

He expressed sadness over unfounded allegations making the rounds on social media.

“We have worked hard by working in two shifts to complete the hospital on time. Also, the estimate is being prepared as per the market rate. Everything is clear,” said Jyoti.

Several officials of the health, the PHE, and the power departments were present on the occasion.

Besides the prefabricated cabins, structures at the DCHC include accommodation for health workers, a kitchen, a dining hall, toilets, a reception area, a doctors’ lounge, a doffing and donning room, a guard room, a mini OT, a nurse room, a laundry house, boundary fencing, a water tank, parking area, rain sheds, etc.