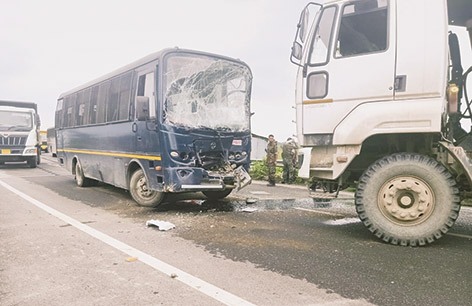 ITANAGAR, Aug 29: At least seven IRBn personnel reportedly sustained grievous injuries when a police bus (AR-01G-5629) with IRBn personnel onboard collided with a tipper truck (AS-06BC-7285) near the Tongani railway station in Silapathar, Assam, at around 11:15 am on Saturday.

Police sources informed that the bus was dropping back a platoon of the 1st IRBn, Namsangmukh, after their law and order duty in Itanagar was over.

The seven injured personnel were evacuated to Dibrugarh immediately after the accident, and the remaining personnel were taken by another bus to their destination. An FIR has been lodged at the Silapathar police station against the tipper driver for rash, dangerous and negligent driving, causing injuries and damages.

The damaged bus will be released on Monday, after all legal formalities are cleared by the Assam police, the sources informed.