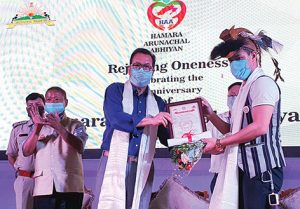 ITANAGAR, Oct 2: Coinciding with the 151st birth anniversary of the Father of the Nation, Mahatma Gandhi, the first anniversary of Hamara Arunachal Abhiyan (HAA) was celebrated at Siddhartha Hall here on Friday.

Deputy Chief Minister Chowna Mein, who attended the event, expressed hope that HAA would be continued with the same zeal in the years to come, saying “it would go a long way in promoting better coordination between communities, public and police administration and pave the way for communal harmony and peace in the state.”

Mein lauded the efforts of Home Minister Bamang Felix and his HAA team for their effort to “build a cohesive atmosphere with the cooperation of the public and the administration.”

He also lauded the young HAA volunteers who are trying to promote police-public partnership for better law and order maintenance in the state.

“The initiative taken by the youth volunteers of HAA towards cleanliness by organizing cleanliness drives in various places is praiseworthy,” Mein added.

Speaking on the pandemic, Mein said, “The most important lesson that the Covid-19 pandemic has taught us is to be self-reliant,” and emphasized on promoting agriculture and allied activities to make the state self-sufficient in foodgrains and vegetables.

Mein said that, in the past five years, the government under the leadership of Chief Minister Pema Khandu has introduced various welfare schemes for inclusive growth and development of all sections of the society.

“The government is focusing on transparency and ensuring that the benefits of government schemes reach the last man in the society,” he said.

Paying homage to Mahatma Gandhi, Mein said Gandhi was the symbol of patriotism and nationalism for every Indian.

Home Minister Bamang Felix highlighted the activities carried out under HAA, and appealed to all to pledge to continue to support and stand united with HAA for a clean, green and safe Arunachal.

Felix announced that under HAA, more than one lakh trees would be planted in the state. He said he has identified a 2 lakh hectare plot in the Itanagar capital region (ICR) to grow organic produces to support and help the farmers to be self-reliant.

ICR DC Komkar Dulom appealed to the government to “institutionalize HAA to carry forward the campaign of oneness, to make Arunachal and Itanagar safe, green, clean and self-reliant.”

ICR SP Tumme Amo said “the responsibility of larger tribes in the state is to ensure that minor tribes feel safe and secured,” adding that Arunachal should stand united.

Distribution of award to the best performing ward/sector, merit certificate to the officials and HAA volunteers, release of the annual report, and an audiovisual presentation on one year of HAA activities were some of the other features of the event.

Earlier, in the morning, Felix and his HAA team and the capital district administration participated in a tree plantation drive at IG Park and planted around 150 saplings. (DCM’s PR Cell)