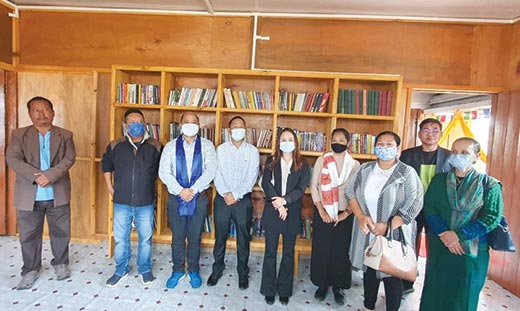 The library, which had been lying defunct, got a massive renovation and facelift recently. New volumes of books were also procured and added to the book stock of the library.

The speaker said that the library should not only cater to the needs of the book readers of the district “but a library class for each standard should also be incorporated into the school routine of the schools nearby.”

He informed that, in due course of time, the library would also benefit by donations from the Raja Ram Mohan Roy Book Trust and contributions from NGOs active in the field in other parts of the state, like Bamboosa.

The speaker also attended a coordination meeting with the HoDs.

During the meeting, which was chaired by the DC, Sona took stock of the progress of various projects/schemes underway in the district, and asked all the HoDs to expedite the projects “on priority basis.”

The speaker and the DC also took serious note of the absenteeism of HoDs from their place of posting. (Speakers’ PR Cell)