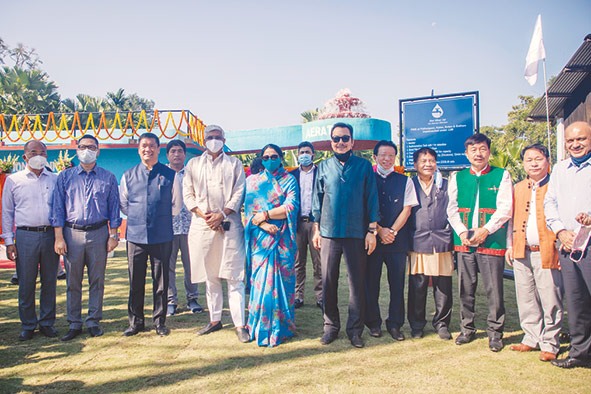 The 0.17 mld drinking water project, funded by the state government, is being implemented under the Jal Jeevan Mission and will benefit 167 households.

The union minister said that, Namsai being the lone aspirational district of Arunachal, has all the attention of the Centre. He said the development of aspirational districts which are lagging in socioeconomic indicators is close to the heart of Prime Minister Narendra Modi.

“So, implementation of all flagship programmes in such districts is being directly monitored by the PM and the PMO,” he said.

Singh said that by the next nine months, “we all should ensure that Namsai district achieves 100 percent coverage of potable drinking water facilities for all households.”

The chief minister said the state government aims to achieve 100 percent potable tap water connections for all households of the state by 2023, a year ahead of the national deadline.

He said that, with support from the union ministry and dedicated work by the PHE&WS department, “the state is making steady progress in providing clean drinking water to every household.”

Khandu said that, with the integrated water supply project in Jia becoming fully functional, “more such schemes with tourism component added to the drinking water projects will be planned for other parts of Arunachal.”

The CM also highlighted the issue of recurring floods during monsoons in the floodplains such as Namsai district. He requested the union minister to provide support for flood protection schemes, since many low-lying areas in Arunachal are at risk due to flood erosion.

Shekhawat also visited the under-construction lift water supply project on the bank of the Teang river, near Marua bridge in Chongkham.

The 1.7 mld capacity treatment plant has been sanctioned by the state government. It aims to provide safe drinking water to 22,695 people, covering 1,285 households in 10 habitations in Chongkham.

Mein, who along with others accompanied Shekhawat, apprised the latter of the tourism and agri-horti potential of the state.

He also apprised the union minister of the importance of Parshuram Kund, which is a famous pilgrimage site for Hindu devotees and a major tourist destination, and sought support from the Centre for infrastructure development at the kund. [CM’s & DCM’s PR Cells)