ITANAGAR, Nov 12: The State Election Commission (SEC) on Thursday declared that the general elections to the panchayati raj institution (PRI) and the municipal bodies of Itanagar and Pasighat will be held simultaneously in a single phase on 22 December. 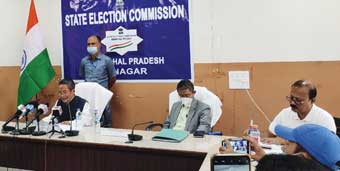 The announcement was made by State Election Commissioner Hage Kojeen during a media briefing at the Dorjee Khandu State Convention Centre here.

The date of the polls is 22 December, and the counting of votes will be done on 26 December. The election is scheduled to be completed on 31 December.

The total electorate for both the PRI and the municipal bodies is 7,39,284, and as many as 2,175 polling stations have been set up, informed Kojeen.

“This will be the first election after the conversion from three-tiered panchayats to two-tier system in the state,” said Kojeen, and informed that the SEC “for the first time in the history of panchayat elections” will be deploying 27 election observers – one for each district, including two municipal bodies.

He added that more than 40,000 personnel will be engaged in the election process to man the elaborate security arrangements. For this purpose, control rooms will be set up at different levels such as at the PHQ, the SEC, the DEO’s office, etc, Kojeen informed.

He also informed that the commission reviewed the preparedness for the elections with all the DEOs on Wednesday through videoconference, and that necessary training for the election officials, such as presiding and polling officials, will be organized at the district level.

In view of the Covid-19 situation, the SEC has also issued a separate standard operating procedure (SOP), which is to be followed by the election officials, the candidates and the political parties during the election process. He added that action would be taken against anyone found in violation of the SOP, under the Disaster Management Act, 2005.

Meanwhile, acknowledging the delay in holding the elections which were supposed to be held in May 2018, Kojeen said that “these local body elections were to be conducted much earlier and the state election commission was fully prepared from day one. But due to the amendment process of the existing act and rules for conversion of three-tier panchayat system to two-tier, as required under the 23rd amendment to the constitution of India, the election has been considerably delayed.”

Adding that “the amendment of the Municipality Act/Rules for conversion to municipal corporation added to the delay,” Kojeen said, “When everything was finalized and the election schedule was also finalized for April/May 2020, there came Covid-19 pandemic situation and the state went into lockdown from March. Therefore, the local bodies’ elections had to be put on hold.”

Declaring that the model code of conduct will come into force from the date of the announcement, which is Thursday, Kojeen advised all political parties to abide by it, and also appealed to the stakeholders, including the state government and the political parties, to help ensure that the election is held in a free and fair manner.