ITANAGAR, Nov 12: A 20-year-old woman, who had been kept in illegal confinement in Longding district on 11 November, has been rescued by the police. 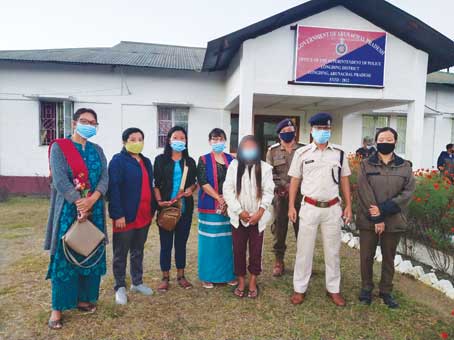 The woman was reportedly taken to the house of the chief of Konnu village against her will, but she managed to reach out to the Arunachal Pradesh Women’s Welfare Society (APWWS) through social media, seeking intervention for her safe release.

The APWWS’ central branch alerted Longding DSP B Tangjang and DGP RP Upadhyaya, who then sent a police team to the village. The woman was rescued from the house of Aching Wangham, the chief of Konnu village.

The woman, who is currently housed at a one-stop centre, was produced before the JMFC on Thursday.

According to the police, the woman was forcibly being married off to one of the chief’s sons against her will.

The woman is reported to be eight months pregnant, but she was not allowed to marry the man of her choice as they belong to different classes.

The Longding branch of the APWWS, which is helping out the woman, said that she is doing well under the circumstances. Her medical test has been done.

The APWWS has thanked the Longding police and the DGP for ensuring prompt rescue of the woman.